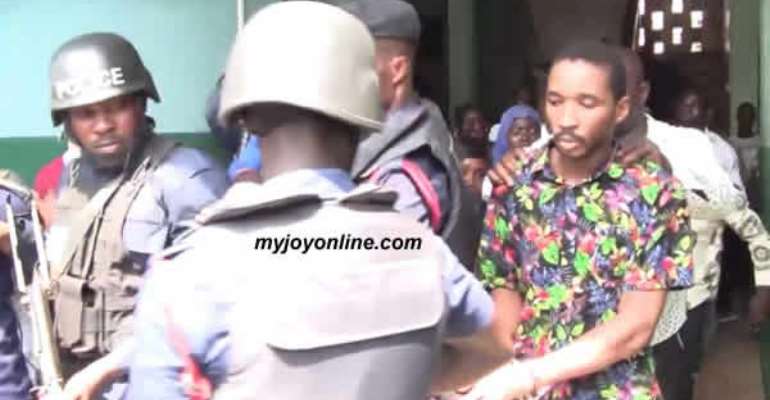 A suspected kidnapper who escaped from jail in December 2018 has been sentenced to 18 months in prison by a Takoradi Magistrate court in the Western region.

The fugitive is a suspected leader behind three kidnapping cases reported in the Sekondi-Takoradi metropolis from August to December 2018.

He was arrested at Kansawurodo, a suburb of Sekondi/Takoradi in the Western region on December 22, 2018.

He used an implement to cut the iron rod for the ventilation in the cell and escaped, the Police have said.

The seven police officers on duty during the escape were directed by the police command in the region to reproduce the suspect within 10 days.

Samuel Wills was re-captured at Nkorful near Takoradi, five days after his escape.

In court he has explained, he got help from two friends, John and Kwesi. He would later add that a Criminal Investigations Department (CID) officer also helped him break out of police cell after handing him a hacksaw blade hidden in bread.

Although he claimed he could identify the officer, he could not use all opportunities presented by the judge to fish out his accomplice.

At the previous sitting, the court asked Sam Wills with the assistance of the Police and the BNI to locate his other witnesses, Kwesi and John whom he had earlier led security agencies on a wild-goose-chase for, without success.

In his sentencing, the judge, His Worship, Michael Ampadu found his testimony on how he escaped inconsistent.

He was convicted of all charges and his sentences are to run concurrently. His substantive allegation of kidnapping remains under investigation.

There was improved police presence during his conviction. At the previous court hearing March 4, 2019, the suspect was attacked inside the court and also assaulted outside it, forcing him to leave his sandals behind.