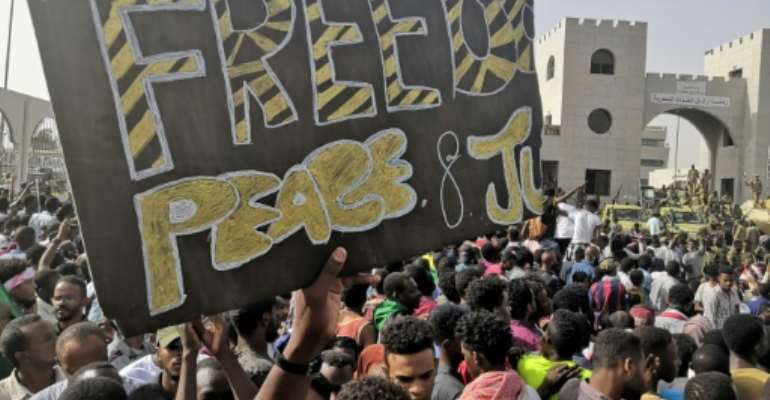 Sudanese anti-regime demonstrators holding up a banner calling for

Ahmed al-Kheir's friends and family are delighted with the Sudanese president's ouster but say justice will only be served once ex-regime officials are made to pay for the village teacher's death in custody.

"We, the family of Ahmed al-Kheir, are very happy with the toppling of (president Omar al-) Bashir and his regime," Kheir's brother Saad told AFP at their family home in Khashm el-Girba, a small village in the eastern province of Kassala along the border with Eritrea.

"We believe that Bashir's entire regime was responsible for Ahmed's killing."

Kheir, 36, was arrested in late January in his village by agents of the powerful National Intelligence and Security Service (NISS) on allegations he was one of the organisers of anti-Bashir protests in the area.

Days later, Kheir's family was told to collect his body from a local mortuary.

A top official in Khartoum confirmed in February that Kheir had died from wounds suffered in detention.

Kheir "had wounds on the back, legs and other parts of his body that led to his death", the official said.

Security agents of the NISS had launched a deadly crackdown on protests that erupted in December in response to the Bashir government's decision to triple the price of bread.

The protests swiftly mushroomed into nationwide demonstrations against Bashir's iron-fisted rule, with protesters urging him to step down.

Dozens of people died in a crackdown by security forces, while hundreds were wounded and thousands jailed.

On April 11, the army finally ousted Bashir after months-long protests that were initially led by a group of teachers, doctors and engineers.

Saad, 35, charged that senior officials of Bashir's regime were behind the killing of his brother.

"The group that came to take my brother was acting on orders from the higher ups," he said.

"Had the regime's top officials objected, that unit would not have done something like this."

Kheir's death fuelled anger against Bashir's regime, not just in Khashm el-Girba but also across Kassala and in Khartoum, where protesters held rallies to express solidarity.

A Sudanese girl draws a portrait of Ahmad al-Kheir, a teacher who died from wounds suffered in detention during Bashir's regime, outside the army headquarters in the capital Khartoum. By Ebrahim Hamid (AFP)

Thousands of protesters who remain encamped outside army headquarters in central Khartoum still chant: "Blood for blood, we will not accept compensation."

They demand punishment for officials responsible for killings by the regime during Bashir's 30-year rule.

Protesters outside the army complex want the military council that took power after Bashir's ouster to step down, making way for civilian rule.

Khashm el-Girba is a farming village, with one main road that cuts through its mud houses, many painted in pink.

Kheir whose one-storey pink structure has a courtyard in the middle, was a popular teacher, colleague Bakhit Mohamed Ahmed said.

"He was an honest man who took part in community functions," he said.

Ahmed recalled an incident when Kheir returned to local authorities around 30,000 pounds ($630) that had been saved from the school's meals-for-children programme.

Kheir was also a member of the Popular Congress Party, Sudan's top Islamist party and an ally in Bashir's government.

The party later called for a probe into all deaths during the initial weeks of protests.

"Those who killed him should be tried in a civilian court," said Ahmed.

A Sudanese protester walks past a recently painted mural of Ahmad al-Kheir, a teacher who died from wounds suffered in detention during Bashir's regime, outside the army headquarters in the capital Khartoum. By Ebrahim Hamid (AFP)

Salah Ali al-Nour, 55, one of Kheir's neighbours, said the teacher had given his life for "freedom, peace, justice," the catchcry of the protest movement.

"We hope that freedom, peace and justice will be achieved," said Nour, his voice choking as tears swelled in his eyes.

"We want all the criminals to be punished."

Nationwide, protest leaders are calling for Bashir and his regime officials to be held accountable for crimes committed during his rule.

"We are not seeking retaliatory measures... but we want to rebuild our justice system to hold them accountable," said Amjad Farid, a spokesman for the protest movement.

Bashir himself, who was initially detained by the new ruling military council, has been transferred to the capital's Kober prison, according to a family source.