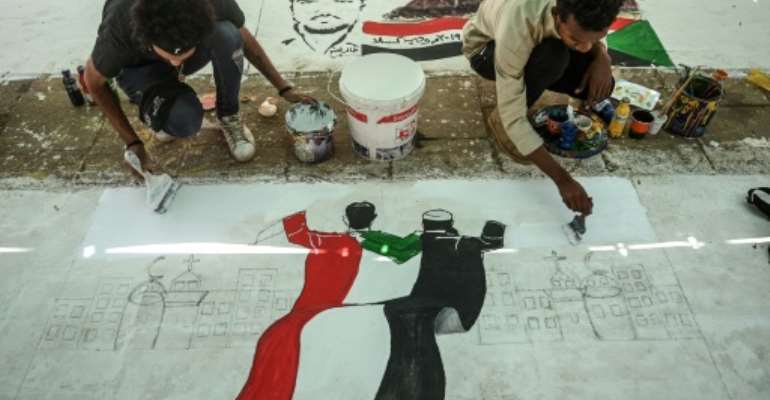 Sudanese protesters paint a mural during a sit-in outside the army headquarters in the capital Khartoum on April 28, 2019. By OZAN KOSE (AFP)

A committee of Sudanese protest leaders and army rulers Monday resumed talks on forming a joint civilian-military council that would replace the existing ruling military body, an AFP correspondent reported.

The negotiations were being held in the presidential palace in Khartoum and a joint statement was expected later on Monday, the correspondent reported from the palace.

The latest round of talks comes after the two sides on Saturday agreed to form a joint civilian-military council to rule the northeast African country.

Under the deal, the joint council would replace the existing 10-member military council that took power after the army ousted veteran leader Omar al-Bashir on April 11 amid massive protests.

The decision to have a joint council paves the way for a civilian administration as demanded by protesters, who continue to rally outside the army headquarters in central Khartoum.

The joint civilian-military council would be the overall ruling body, the protest leaders say, while a new transitional civilian government was expected to be formed to run the country's day-to-day affairs, a key demand of protesters.

That civilian government would work towards having the first post-Bashir elections.

The military council has so far insisted it has assumed power for a two-year transitional period.

Thousands of protesters first massed outside the army headquarters on April 6, demanding that the armed forces back them in ousting Bashir.

Since then the 10-member council of generals has continued to resist calls to step down.

Western governments have expressed support for protesters' demands, but Sudan's key Gulf Arab lenders have backed the military council, while African states have called for more time for the army.