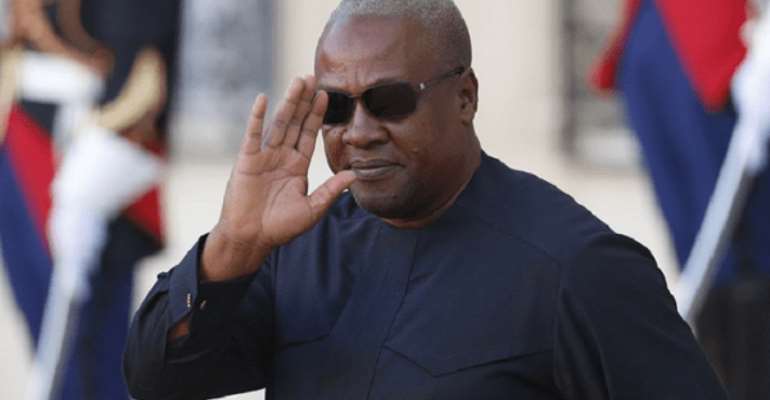 Apparently, there is an ongoing public discourse following the unfortunate exit of the loyal and hardworking ‘Otians (the indigenes of Oti Region) and Voltarians’ (the indigenes of Volta Region) from the NDC’s National Executives during the 2018 National Congress.

The thoughtful tattletales have since been discussing, albeit anecdotally, that the hardworking and dedicated Otians and Voltarians were humiliated in the NDC’s National Congress for a reason.

Somehow, the critics have been insisting that the majority of the Otians and Voltarians who were voted out on Saturday 17th November 2018 were unrepentant critics of NDC’s flagbearer, former President Mahama.

Caveat: dearest reader, if you were to ask my opinion on the topic under discussion, I will venture to state that I do not have any marked disposition for or against the position of the reflective gossip mongers.

While some observers are suggesting somewhat poignantly that the NDC Delegates did not take into account the all-important factor of regionalism and went ahead to oust the Otians and Voltarians from the National Executives, others are insisting somewhat ponderously that the critics are stoking tensions by raising the otherwise germane question of regional balance.

Whatever the case, it is somewhat sophistic for anyone to suggest that those who have been raising the crucial question of regional balance are ‘bang out of order’.

In the grand scheme of things, the 1992 Constitution promotes ‘regionalism’. Indeed, Ghana’s Constitution obligates the elected presidents to ensure regional balance when selecting the members of the government.

To me, the onus is on the various political parties to ensure that such convention is adhered to at all times.

Let us therefore commend the New Patriotic Party (NPP) for putting pragmatic measures in place to remedy such unforeseen occurrences.

Apparently, the NPP has prudently decided to select the deputies of most positions so as to ensure the regional balance.

In fact, the inexplicable ousting of the Otians and Voltarians from the NDC’s National Executives will continue to generate debate amongst discerning Ghanaians.

To be quite honest, I find it really difficult to believe why the NDC apparatchiks always find it so expedient to take the good people of Oti and Volta Regions for granted.

Indeed, it is extremely puzzling to keep hearing that the people of both Oti and Volta Regions are ever content with any decision by the party and therefore can never turn their backs on the NDC.

The overarching question then is: how long will the NDC apparatchiks continue to give the good people of the Oti and Volta Regions a raw deal?

Let us face it, though, there is nothing wrong for political parties to have party precincts or strongholds.

Likewise, it is not abominable for individuals to have political party preference, as it is acceptable in even most advanced democracies.

But all said and done, unlike the voters in developing countries, the vast majority of voters in the developed countries do not vote for voting sake.

In other words, voters in the advanced democracies mostly vote on the issues that affect their lives.

It was against such backdrop that the vast majority of the UK Labour Party supporters in Scotland voted against their party in the 2015 general elections for failing to live up to their expectations.

We should, however, not lose sight of the fact that election is supposed to be a social contract that exists between a party/candidate and a voter. In essence, the party/candidate solicits for votes from potential voters in exchange of provision of relevant human needs.

It is based on such agreement that the various parties choose to enter into contract with Ghanaians during general elections.

I must, therefore, stress that we choose to exercise our democratic rights during general elections in anticipation that our lives would be transformed positively.

But the all-important question every Ghanaian should be asking is: did our lives transform positively under the erstwhile NDC government?

No, the vast majority of Ghanaians became worst off in terms of the socio-economic standards of living under the NDC administration.

In effect, the NDC disappointed the vast majority of Ghanaians, including the voters from the NDC’s ‘World Bank’-Volta Region.

It was, therefore, not surprising that prior to the 2016 general elections, some noble Chiefs from the Volta Region were reported to have complained bitterly about the harsh economic conditions the Mahama government wilfully imposed on innocent Ghanaians, including their subordinates.

Thus, it is somewhat heartrending to keep listening to the NDC apparatchiks impetuous argument that the people of Volta Region are ever content with their lives under NDC governments and therefore cannot see why Voltarians would turn their backs on the NDC.

Well, let the NDC apparatchiks keep taking the good people of Oti and Volta Regions for granted at their own peril.

If you may recall, during the 2008 and 2012 general elections, the NDC apparatchiks beseeched electorates to give them the mandate and in return, they guaranteed everyone protection of life, property, provision of social infrastructure and amenities, better socio-economic standards of living and to a certain extent liberty.

Prior to the 2008 and 2012 general elections, the NDC leadership gave a slew of Manifesto promises, including one-time NHIS premium, free SHS, ‘making dumsor a thing of the past, putting money in Ghanaians pocket, creating more jobs for the jobless, stabilising the economy, protecting Ghanaians from the menaces of galamsey and Fulani herdsmen, bringing an end to dubious judgement debt payments, fighting the rampant sleazes and corruption, amongst others.

Ironically, with all their juicy promises, the previous NDC administration failed to end the dumsor, jobs weren’t readily available for the jobless, the economy sunk deeper and deeper into the mire, Ghanaians became poorer and poorer, sleazes and corruption escalated to immeasurable proportions, meaningless borrowings , amongst others.

In fact, the NDC government failed to honour many Manifesto promises, but the one that has indelibly stencilled on discerning Ghanaians mental sheets, is the one-time NHIS premium. That Manifesto promise, so to speak, was destitute of honesty and integrity.

That said, we can neither ignore nor deny the fact that the vast majority of Ghanaians, including the good people from the NDC’s stronghold (the Volta Region) have benefited immensely and still benefiting from the successive NPP governments pragmatic introduction of social interventions like the Free SHS, the Free Maternal Care, the School Feeding Programme, the National Health Insurance Scheme, the Mass Transport System, the Livelihood Empowerment Against Poverty (LEAP), the National Youth Employment Programme, now known as GYEDA, amongst others.

If you may remember, it was former President Kufuor who erected the Keta Sea Defence to ensure that the good people of the Volta Region are safe from ‘Tsunami’ or seismic sea waves.

Ghana under the erstwhile NDC administration, so to speak, experienced massive economic downslide which regrettably brought to pass harsh socio-economic standards of living.

The vast majority of unhappy Ghanaians, including the good people of Volta Region, rightly so, voted against the NDC and Ex-President Mahama in the 2016 election largely due to the unresolved business crippling dumsor, the unpardonable incompetence and the wanton sleazes and corruption which brought untold hardships.

Thus, it is quite bizarre that the NDC faithful will find a cause to complain when the Mahama administration wilfully destabilised the macroeconomic indicators.

The fact however remains that the good people of Ghana are currently enjoying uninterrupted electricity, reductions in electricity tariffs, low inflation, tax reductions (including import taxes), favourable economic growth, gargantuan savings on free SHS, amongst others.

In fact, some of us were extremely livid when former President Mahama out of meaningless benevolence doled out large portions of our scarce resources to inveterate NDC apologists like the founder of Ghana Freedom Party (GFP), Madam Akua Donkor, who in all honesty, contributed nothing meaningful towards Ghana’s wellbeing.

Ghana, to be quite honest, does not need a Father Christmas who would carelessly give away our hard earned resources to parasitic creatures who do not contribute anything meaningful to the nation building. But Ghana rather needs a serious, a committed and a forward-thinking leader who can utilise our scarce resources judiciously to the benefit of all Ghanaians.

Suffice it to emphasise that a judicious distribution of national resources is the implementation of social interventions such as Free SHS.

It is, indeed, prudent and somewhat forward-thinking for any serious and committed leader to seek to bridge the ever widening social inequalities gap through rational distribution of national resources in the form of free SHS and other social interventions.

Surely, many Ghanaians are benefiting from the Akufo-Addo’s government prudent decision to distribute the national resources in the form of Free SHS which has paved way for more than 400,000 children a year, including the over 190,000 children who otherwise would not have the opportunity to enter senior high school.

Delightfully, the government is expected to spend a minimum of GH5532.83 over a period of three years on each student.

This means that parents with three children in SHS will be pocketing not less than GH16598.49 over three years.

Besides, the incumbent NPP government has decided to relieve Ghanaians of over eighteen nuisance taxes introduced by the erstwhile Mahama administration which had previously crippled Ghanaian businesses.

More recently, the forward-thinking Akufo-Addo government commendably slashed the import taxes (30% on cars and 50% on goods) to the utter delight of importers.

Since the announcement of the reductions of benchmark values, some beneficiaries have attested to considerable discounts.

Moreover, the Akufo-Addo government has restored the Nurses and Teachers Allowances which were regrettably cancelled by the erstwhile Mahama administration.

That, to me, is an example of prudent governance which deserves commendation and emulation.

My dearest reader, would you be sincere enough and name just a single social intervention that has been implemented by the NDC that prides itself as social democrat?

I have stressed time and time again that there is nothing wrong for voters to have a preferred political party. However, voters must not and cannot allow manipulating politicians to take them for a ride in perpetuity.

In ending, I will venture to state that the leadership of NDC should refrain from taking the people of Ghana, including the NDC loyal supporters from the Oti and Volta Regions for granted.