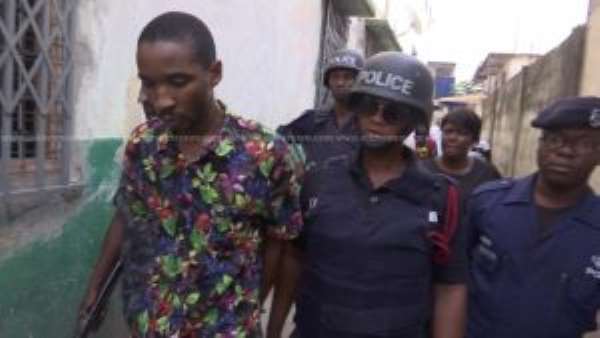 Sam Udoetuk Wills, the suspect at the whole of the kidnapping of some three girls in the Takoradi Western Region has arrived at the Takoradi Market Circle District Court after failing to appear at two earlier sittings over charges of jailbreak, destroying public property and resisting arrest.

Sam Wills, who arrived at the court under tight security, last appeared before the court on March 4 where he was almost attacked by the aggrieved families and friends of the kidnapped girls.

The judge, however, adjourned the case to April 1 and subsequently April 15.

The suspect, however, failed to appear as he was said to be assisting investigations into the whereabouts of the kidnapped girls.

At the previous sitting, the court, presided over by Judge Michael Ampadu, asked Sam Wills with the assistance of the Police and the BNI to locate his witnesses, Kwesi and John whom he had earlier led security agencies on a wild-goose-chase for, without success.

It is anticipated that the court might today give its ruling on the jailbreak case which families of the kidnapped girls had urged the court to conclude.

Sam Udoetuk Wills, a few weeks ago told the Takoradi District Court that an officer of the Criminal Investigations Department (CID) aided his escape.

The suspect told the court that he would be able to identify the CID officer who aided his escape if he is presented in a parade.

The Western Regional Police Command subsequently set up a committee to investigate these claims.

Sam Udoetuk Wills, escaped from police custody on December 30, 2018, but was subsequently rearrested at Nkroful.

He told a Takoradi District High Court that he was able to escape with the help of a CID officer and that he would be able to identify the officer if he is presented in a parade.

The girls who were kidnapped have been identified as Ruth Quayson, Priscilla Blessing Bentum and Priscilla Koranchie.

Their abductions have sparked anger against the police from some residents of the Sekondi-Takoradi Metropolis.

Families of the victims have threatened protests against the police over delays and their possible complicity in the kidnappings.