Can We Blame Religion For Africa’s Economic Woes?

How Patriotism, Innovation, Creativity And Technology Build A Nation And The Effect Of Religion On The Development Of Nations.
By Edward Bamfo-Darko 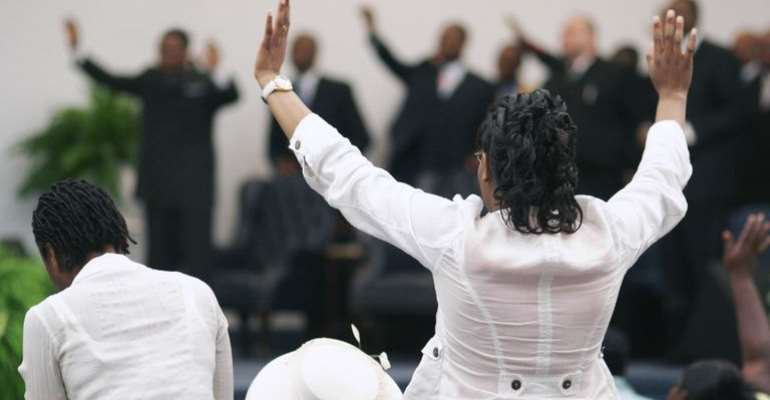 It is impressive and great to see the efforts of the present government of Ghana towards industrialized, digitalized and technologically innovative economy. Within two years, the country has made great progress in digitalizing, industrializing and innovating the economy of the small West African nation.

It is not a wonder that the small West African nation is one of the fastest growing economies of the world today with GDP growth averaging 7% in the last two years. Ghana’s Foreign Exchange Reserves increased to 7024.78 USD Million from 6854.14 USD Million in one month period from November 2018 to December 2018.

In Ghana, Christianity and Islam are blended. The national chief Imam of Ghana attended Christian church serves to commemorate his (the Imam’s) hundred-year birthday celebration in April 2019.

The current President of Ghana, Nana Addo Dankwa Akufo-Addo, a previous legal practitioner and civil right advocate, is a Christian. His Vice is a Muslim. The President attends Muslim services, and the Vice attends Christian services, and even preach from the Bible from Christian pulpits. I am not drawing your attention to politics and religion, I want to draw a line between religion and economic innovation.

The political campaign promises by the current President were “free education to senior high school level”, “one district, one factory” and “zero tolerance towards corruption”. These are the policies the present government is implementing alongside massive infrastructural and agricultural development that have witnessed great strides in the economic and social development of Ghana in just two years of the government.

The current vice-President of the country, Alhaji Mahamudu Bawumia, a Sunni Muslim, is an economist and a banker. He is the head of the government’s economic management team and the digitalization programs of the nation.

Great nations on earth today are all religious. If any person says that religion is evil, he or she is simply saying that human beings are evil. Religion is a way of human life. We are created in the likeness of God, so there is a form of godliness or religious trait in every human being, which is expressed in our religious inclinations. But this can be helpful or an albatross.

The western world is Christian, the east is Hindus, Buddhist, and Shintos. Take Germany, for example, she is a great Christian nation that observes Christian social principles in her governance, as well as Christian holidays, such as “three kings (or the three wisemen)” ascension of Christ and the Pentecost day.

If people are corrupt, dishonest, unpatriotic and ungodly, they become self-destructive human beings, heading along the path of retrogression. Religion only adds to their evil characters that are embedded in corruption, laziness, and self-exploitation.

Religion is not the black Africans’ albatross or psychological burden that appears like a curse. It has never been. Somewhere last year I wrote about how devastating religion could have on a nation and I blamed religion for black African woes. Yes, religion has dealt with Africans, but it doesn’t make it evil. It is just like agreeing with Paul that the law was the cause of sin and curses, but the law itself was good and holy.

Africans are just indigenous people blaming everything, but not ourselves. We refuse to take scientific development seriously. Every single nation and people at the forefront of development is innovative, technologically creative and industrious. But black African countries refuse to take industrial, technological and scientific development serious. Instead, we turn to be selfish, self-destruction, corrupt and national looters.

We refuse to take responsibility for our own actions and blame someone for the consequences. We criticize and blame even debris and filth we make in our homes and on our streets on the government. If we don’t have jobs we complain, if we have one, we refuse to be honest and patriotic to our employers.

United Arab Emirates (UAE) is an Islamic country. Emirate of Dubai is one of the states of the country. It is one of the innovative, distinctive and record-breaking technological strides in the world.

Dubai is not a country. It is one of the seven emirates that make up the UAE. UAE is an Islamic country which gained independence from Great Britain in 1971. The population of the UAE is 9.54 million (according to 2018 statistics).

Dubai is not the capital city of UAE. The capital city is Abu Dhabi. Yet, Dubai is the fastest growing Science and Information & Communication Technology (ICT) hub in the world. Dubai has a population of 3.1 million (2018).

Dubai is an example worth emulating. She is a world leader in education, innovation and infrastructure development in the 50 years history of the nation. The Emirate of Dubai has singlehandedly launched 2 satellites into Space.

The last launched spacecraft had the innovative signature of a Dubai teenage girl on it? A teenager who dreams to be the first astronaut on Mars. By 2020, the Emirate of Dubai will be launching its first Mars Exploration Spacecraft?

The Emirate of Dubai currently has the largest number of foreign research Scientists and ICT experts in the world?

What is the difference between their practice of Islam which encourages a teenage girl to aspire to Mars and that of Emirates in Africa that are only concerned about marrying under-aged girls?

What is the difference between their practice of Islam which prioritizes innovations and science and that of African Islam and Christianity that foolishly prioritize corruption, building of church houses and tithing the poor?

Religion, either Islam or Christianity, is not the African main problem. Anyone who argues otherwise is thinking fallaciously. Africans are messed up because we are not innovative, creative and ready to take responsibility for our actions. We are selfish, self-destructive and lazy complainants.

Our politicians are free national looters, who encourage the youth to seek ritual monies. Our pastors encourage the believers to seek miracle money, prosperity by sowing seeds and tell the young ladies to fast for life partners. However, the only way to receive miracle money, which is practiced by all people everywhere, is creativity and hard working. The only way to create prosperity and wealth is innovative ideas and services. And the only true life partner is entrepreneurship and business ideas.

Our orientation, our mindset, our value-system, our sociocultural ethics, our ways of life and social practices or how we think as people are unproductive and unprogressive. Modern Arab men in gowns and Arab women in purdah engage in dialogue about championing the next frontiers in science and innovations.

Black African Christians and Muslims, on the other hand, instead of being innovative and technological thinkers, are rather unproductive and selfish. Every African Christian and Muslim should stand up against the kind of Christianity and Islam practiced in the nations of black Africa.

Emirate of Dubai is the leader of the Arab World. A well-deserved title.

Professor Isa Hussaini of Faculty of Pharmacy at the University of Maiduguri in Nigeria, a Muslim, said that the blame for Nigeria’s woes fell on us all, “you and me, not (only) on Buhari, not Jonathan, not Obasanjo and definitely not Abacha”.

“Our wickedness (as a people), stinks to the heavens as we go about our daily lives, (exploiting and stealing our own selves and stashing the money abroad and in bunkers and) pulling down everyone and everything to become rich. We import substandard products, fake drugs and expired baby food unfit for human consumption and we have the nerve to complain about leadership?”

Every Black Africa nation is either Christian or Muslim, yet we steal from ourselves, including widows, orphans, and refugees. Europeans and North Americans, who profess the Christian faith, support the poor and the unemployed economically with monthly financial and social help and provide housing and health to the needy.

The Muslim nations of the world also support the needy and the poor among them. Islamic countries, such as Kuwait, Saudi Arabia, Iran, and Libya under the ex-while Muammar Al Gaddafi, provide financial and social help, housing and education to their citizens.

Giving economic help to the poor and the unemployed in society grow the economy. The poor and the unemployed joined together, form the largest social group in the economy. While they are given money to spend in the form of economic support, they increase the economic volume of the country by creating buying capacity, higher manufacturing products demands and thereby causing the industries to employ more workers and expand their investments, profits, cooperate taxes and workers income tax.

But black African nations neglect the poor and the unemployed. Rather, the state leaders loot the national coffers to cater for themselves and their families. The Christian leaders are worse than their Muslim counterparts in that they do not only refuse to support the poor and the needy ones, they also take from them in the name of God.

We steal even food items meant for refugees and sell them for profit. No conscience. Nothing is sacred. No one is spared. Christians and Muslims at the head of government and cooperations build substandard roads, schools, houses, hospitals, all for profit at the expense of human life; an invaluable item, which all our profit and contract sum cannot buy.

It is not only the evil ones in the African societies that are guilty, but this is also the character of many decent looking people who appear to be godly but are not any better than armed robbers. These evil characters are found among many church leaders and members, Muslims, husbands, wives and sadly, the youths.

We pervert justice and pretend we do not know the right from the wrong, just to serve our selfish interests. We enslave our own brethren who are fallible in the churches and exploit them in the name of God. Slave traders are far better than Christian pastors in the black African churches, because the slave masters feed the slaves, while the Christian pastors siphon all that the congregations have with no physical reward in return. We have personalized wickedness. So much lovelessness and exploitation flow in our blood and we transfer it to our children.

We fast and pray all seasons and all sessions, all year long, night vigils, deliverance and miracle conferences and festive conventions with dances and hallelujah hymns, yet the actual problem is us. We simply cannot learn to love others. It is me, me, me. That is all that ever matters. It is sickening. Anyone who cannot love deserves no place in the churches, politics, government and leadership position in any discipline in the African society. Until we take such an action as a people, we shall continue on this horrible path of destruction.

I can Change, You can Change, We can change and become innovative and selfless citizens, and not just Christians and Muslims with destructive characters, deceiving ourselves.