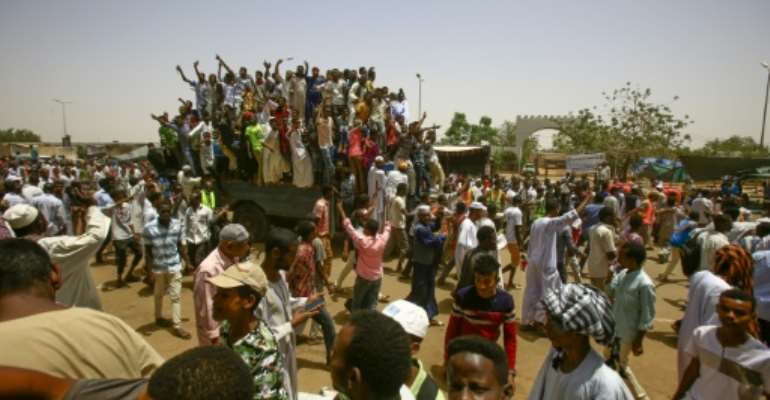 Sudanese protesters gather near the military headquarters in the capital Khartoum. By ASHRAF SHAZLY (AFP)

A top opposition leader called Saturday for Sudan to join the International Criminal Court which has indicted its ousted president Omar al-Bashir, as protesters and the military met to discuss civilian rule.

Sadiq al-Mahdi, a former prime minister and head of the opposition National Umma Party that has backed the protests, also told reporters that the army's ouster of Bashir was "not a military coup".

His comments came as a joint committee representing the ruling military leadership and protesters held their first meeting to discuss a demand by demonstrators for a handover to civilian rule.

Bashir was ousted by the army on April 11 after months-long protests that rocked his three-decade-old rule.

Thousands of protesters reached the sprawling military headquarters in central Khartoum on April 6, demanding that the army support the demonstrations against Bashir.

Five days later, the army ousted Bashir but then took power into its own hands through a 10-member transitional military council.

The protesters, who have kept up the pressure round-the-clock outside army headquarters for weeks, are now demanding that the council step down and make way for a civilian government.

Mahdi, who said his party would not join a civilian transitional government, told reporters "it is possible to agree on a civilian authority with the military council because they did not plan a coup".

The armed forces had taken the side of the protesters demanding that Bashir be removed from power.

Mahdi also said Sudan should "immediately" join the Hague-based International Criminal Court where Bashir is wanted for genocide, war crimes and crimes against humanity for his alleged role in the conflict in Darfur.

"This should be done in coordination with the transitional military council," he added.

Bashir, 75, has consistently denied the charges against him.

The war in Darfur erupted in 2003 when ethnic black rebels took up arms against Khartoum's Arab-dominated government, accusing it of social and political marginalisation.

The United Nations says about 300,000 people have died in the conflict, with another 2.5 million displaced, many of them still living in miserable camps across the western region of the country.

Bashir swept to power in an Islamist-backed coup in 1989 that toppled Mahdi's elected government.

Mahdi, who was ousted by Bashir in the 1989 coup, said Saturday that although the president had been removed, his regime was still in place.

"The head of the regime has been ousted but the regime is still present," Mahdi said.

"The toppled regime might still try to do a coup," he said without elaborating.

Protest leaders have held several rounds of so far inconclusive talks with the military council since Bashir was ousted.

Earlier this week, the two sides agreed to set up a joint committee to chart the way forward.

The Alliance for Freedom and Change, which brings together grassroots organisers with opposition and rebel groups, said the committee was holding its first meeting on Saturday.

The military council has so far refused to step down, insisting that it has assumed power for a two-year transitional period.

But on Friday, it said it was in "continuous communication" with the protest movement and was waiting for it to choose delegates to the new joint panel.

Western governments have expressed support, but Sudan's key Gulf Arab lenders have backed the military council, while African states have called for more time for the army to hand over to civilians.