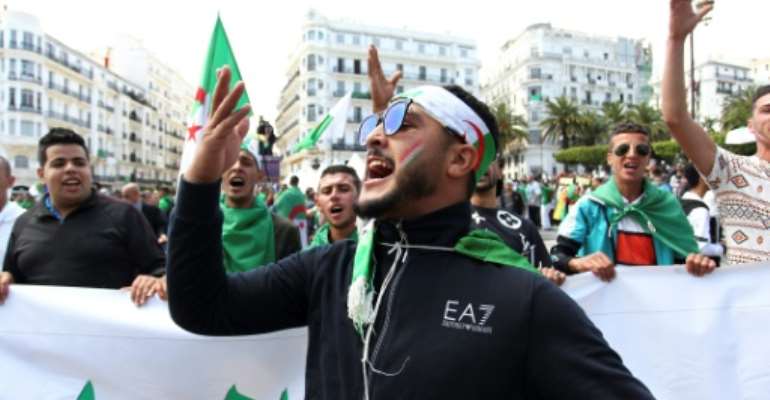 Algerian protesters say they are determined to keep up the pressure for reforms and proscutions of corrupt officials. By - (AFP)

Algerian protesters vowed Friday to keep up the pressure on the regime left behind by Abdelaziz Bouteflika, staging a tenth consecutive weekly mass rally after a string of people close to the toppled president were sacked or arrested over alleged graft.

"We want this system to leave and all the thieves to be judged," said Zohra, a 55-year-old teacher who travelled some 350 kilometres (220 miles) to attend the Algiers demonstration site with her 25-year-old son, Mohamed.

Friday's protest is the tenth weekly mass rally since Bouteflika announced in February that he planned to stand for a fifth term in office. By - (AFP)

The latest demonstrations followed the sackings of a string of senior regime officials and the detention of top businessmen including the country's richest man, Issad Rebrab, over suspected corruption.

And earlier in the week, the head of the vast state oil firm Sonatrach, Abdelmoumen Ould Kaddour, was also fired and replaced on the orders of interim president Abdelkader Bensalah.

Four brothers from the influential Kouninef family, close to Bouteflika's brother Said, were also arrested Sunday over alleged non-compliance with state contracts, according to state media.

But protesters have yet to win one of their key demands: the departure of Bensalah himself, a member of Bouteflika's inner circle throughout his 20 years in power.

Protesters have rejected a July 4 presidential election announced by the interim government. By - (AFP)

They are also demanding the ouster of another key ally of the toppled leader: Noureddine Bedoui, who remains prime minister in what protesters call "a government of shame".

The interim administration has pledged to hold presidential elections on July 4, but demonstrators reject any such vote overseen by Bouteflika-era officials.

Protester Samir said he was against the poll.

"How mafia and fraudsters can hold honest elections? We'll march until they understand," he said.

The arrests come after army chief Ahmed Gaid Salah called on prosecutors to "accelerate the pace" of corruption probes into those with ties to Bouteflika's inner circle.

The army has also insisted that the presidential vote take place within the timeframe set by the constitution.

Some observers see the army's pressure for prosecutions against allegedly corrupt individuals as an implicit offer of a deal to protesters: punishment of key figures or in exchange for a softening of demands, especially over the presidential poll.

International Crisis Group warned Friday that a stalemate was looming in Algeria as protesters and security forces "disagree on the pace and content of a political transition".

"Despite repressive counter-measures, protesters showed no sign of giving in... The protests are only growing," the Brussels-based think tank said in a briefing Friday.

The government "should embark immediately on a dialogue with civil society leaders accepted by the protesters" to lay out a "political transition that would serve to restore confidence and prevent an uncontrolled cycle of violence".