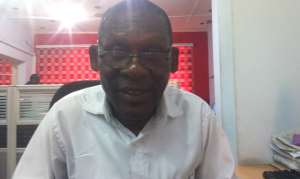 Mr. Amekah, who disclosed this in an interview with DAILY GUIDE on Tuesday in Accra, observed that individuals who invade the Electoral Commission in their numbers during the compilation of election results should be punished because their action contravenes the law.

According to him, that should be factored into the soon-to-be-passed vigilantism bill.

Commenting on the 1D1F initiative, he encouraged the government to pay key attention to the already existing factories to enable the country move in the right direction.

He also said building the railway line to Paga in the Upper East Region would bring development in the cities and improve the economy of the country.

Commending President Akufo-Addo for putting up initiatives to revive the agricultural sector, he appealed to the government to form a coalition of national best farmer award winners to make the policies sustainable.

On the issue of Free SHS, he stated: “The free education policy implementation is a laudable initiative and would help a lot of parents and children, because vulnerable parents who were not able to send their wards to school can now have access to educate their children”.

He urged Ghanaians to vote wisely to retain President Akufo-Addo in that no government could serve them with milk and gold better than the current President.

Ho West Tension: Killer Reports Himself To Police
53 minutes ago