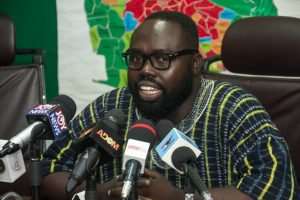 The Opposition National Democratic Congress (NDC) had kicked against the organisation of the upcoming limited registration exercise at the district level.

Addressing the media last week, the General Secretary of the party, Johnson Asiedu Nketia said the NDC “differed very strongly” on the matter and is “opposed to any system of registration that will be limited to the district offices of the EC.”

Deputy General Secretary of the party, Peter Otokunor, in a Citi News interview said Madam Jean Mensah told the NDC officials at the IPAC meeting that she owed them no explanation over the EC's approach to the exercise and found it disrespectful that Asiedu Nketiah let out laughter while she spoke.

Otokunor argued that the Chairperson’s posturing was fast becoming a threat to the Commission as an institution.

He insisted that a lot of Ghanaians will be disenfranchised if the limited registration exercise is held at the district level.

“The argument we have made is that, it would be a tool to disenfranchise the ordinary citizens who have an inalienable right under the laws of the country to exercise their franchise as citizens of this country. When you look at the trials they did last year with the referendum, they did the registration in 47 districts, they estimated 100,00 eligible voters but only 47,000 were recorded. That tells you clearly that a lot more of the people who could have registered did not register,” he said.

Asiedu Nketia at the press conference last week stated that “The parties never agreed with the Electoral Commission [at an IPAC meeting] to limit the limited registration [exercise] to only district centres of the commission.”

The party insists that the EC must stick to the decentralisation of the exercise up to the electoral area levels instead of the 260 districts offices.

In addition, he said, “evidence available shows that it is a system that will end up disenfranchising many qualified potential voters.”

Mr. Aseidu Nketia also raised concerns about the possible lack of resources at some of the newly created districts.