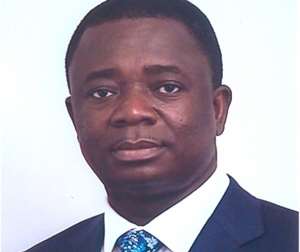 Dr. Alfred Arthur, a scientist at the Cocoa Research Institute of Ghana (CRIG), a division of COCOBOD, government’s second witness in the criminal trial of Dr. Stephen Kwabena Opuni and Alhaji Seidu Agongo last Wednesday, concluded his testimony at an Accra High Court, making further revelations which contradicted the Attorney-General’s claims to the court.

But the most notable event on the day was Dr. Arthur’s admission that, although he carried a test in 2017, on Lithovit liquid fertilizer, upon the request of a government probe, this expert report was not tended in evidence by him to support the Attorney-General’s claims against the agrochemical and the defendants.

Dr. Arthur, told the Court that there was no time in point since Lithovit fertilizer was introduced to farmers that management at CRIG, received negative feedback on the product.

Interestingly, within the 3-year period which the witness admitted that he was on the field, either training farmers on new product or on operation duties, he claimed he never heard of Lithovit fertilizer.

Dr. Arthur, was responding to questions under cross-examination from lawyer Benson Nutsukpui, counsel for businessman, Seidu Agongo, the CEO of Agricult Ghana Limited, who is standing trial together with former CEO of Cocobod, Dr. Opuni.

Dr. Opuni and Mr Agongo, are facing 27 charges, including defrauding by false pretences, willfully causing financial loss to the state, money laundering, corruption by a public officer and contravention of the Public Procurement Act.

They have both pleaded not guilty to the charges and are each on a GHS300,000, self-recognisance bail.

When Mr Nutsukpui, told him it is impossible for him to claim to have worked in 6 out of the 7 cocoa regions without seeing the product, he responded, “My lord it is very possible”.

Dr. Arthur, was again asked if it was true that when the farmers have any problem with a product, they complain “loudly”.

“My Lord throughout my work, we usually get those complaints from farmers when we go for re-evaluation for certificate renewal,” he answered.

It was also pointed to him that so controversial was the Lithovit Liquid fertilizer that the Economic and Organized Crime Office (EOCO) had as much as two reports on the product, but he denied knowledge of these reports.

Find excerpts of the cross-examination below

Q: For the 3 years did it come to your knowledge that Lithovit was being distributed to farmers in the cocoa growing regions?

Q: So throughout the three years that the materials were supplied, you Dr Arthur never complained about the litovit product.

Ans: My lord I didn’t see it

Q: Tell the court if you know that there was no complaints about the product from CRIG.

Ans: Yes, to the best of my knowledge, there was no complaints

Q: And no worker at cocobod complained about the product.

Ans : yes my Lord, I don’t know of any complaints

Q: And there were no complaints from the procurement department.

Ans: no my lord,no complaints

Q: As a worker at CRIG, did any farmer complained to you about the product?

Ans: No my Lord

Q: I am putting it to you that it is not true that you had never seen the product lithovit fertilizer from 2014 to 2016.

Ans: my lord, it is absolutely true that I never saw the product

Q: I am further suggesting to you that lithovit was distributed to all cocoa growing regions in all the three years.

Q: It is impossible for you to claim to have worked in 6 out of the 7 regions without seeing the product.

Ans: My lord it is very possible

Q: Dr Arthur, it is true that when the farmers have any problems with a product, they complain loudly.

Ans: My lord throughout my work, we usually get those complaints from farmers when we go for re-evaluation for certificate renewal

Q: I am putting to you that the farmers had no problems with lithovit when they were using the product.

Ans: my Lord, that is not true.

Q: Did CRIG received any complaints from the farmers?

Ans: Not that I know of. My lord as I said, the sample that we analyzed in 2017 for renewal of certificate on AgricultLithovit fertilizer had less calcium carbonate as against the one we analyzed on the Lithovit from Germany

Q: You Dr Arthur knew you were going to conduct this exercise before the AduAmpomah committee.

Ans: my Lord that is not true

Q: You even asked if you should go on with the evaluation since the matter was under investigation.

Ans: My lord i don’t remember

Q: I am putting it to you that you stated that you should be given approval whilst the matter was pending at the AduAmpomah committee.

Ans: My lord that is not true

Q: You never requested samples of the product from Agricult.

Ans: that is correct my Lord. During re-evaluation, samples can be obtained from the company, open market, cocobod warehouses or CHED offices. So for the 2017 the Lithovit sample was collected from Tafo District Cocoa office

Q: Did you know that lithovit had by then become so controversial that EOCO issued two reports on it.

Ans: My lord I don’t know

Q: Agricult, the second and third accused were not consulted during your activities at CRIG.

Q: And Agricult had no influence on when and how to conduct your evaluation.

Ans: Yes my Lord they have no influence.