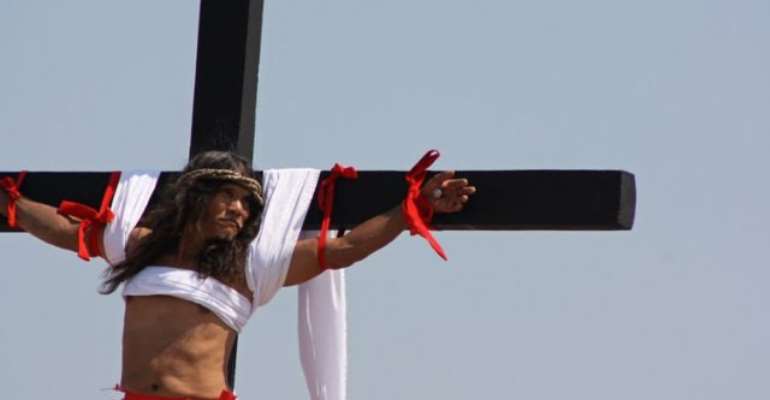 Filipino Catholic man playing the role of Jesus Christ in a yearly Good Friday reenactment of his crucifixion has been nailed to a wooden cross for the 33rd consecutive time last week.

58-year-old Ruben Enaje, from the barangay of San Pedro Cutud, in San Fernando City, has been volunteering to get nailed to a cross on Good Friday since the 80s, but recently announced that next year will be his last impersonating Jesus Christ.

He is currently looking for a successor willing to have four-inch nails driven into his hands and feet and get lifted on a large wooden cross for about five minutes, every Good Friday. He also wants that person to be humble and not brag about their special role.

“I want to only do this until next year,” Enaje told Reuters. “What I’m looking for in my successor is that he serves as a good role model in his community and a person with good manners and values, not someone who would boast about the role or be too proud.”

The tradition of reenacting the crucifixion of Jesus Christ in San Pedro Cutud dates back to 1962, and is believed to have been inspired by the a play written by a local playwright.

It has become one of the most popular religious festivals in the Philippines, attracting thousands of Christian onlookers every year. However, it’s also a very controversial event.

Both Catholic leaders and public health officials condemn the practice of crucifixion and have been trying to discourage people from taking part in the yearly festival.

Although wounds caused by the metal nails take up to two weeks to heal, religious fanatics who volunteer to get nailed to a cross say it’s a small price to pay for the opportunity to express their faith in a special way.

More Weird News
Modern Ghana Links
Chinese Restaurant Operator Uses Opium To Get More Customers
Man gets tens of thousands of birthday calls after sons post his phone number on billboards
Mysterious Condition Makes Woman's Breasts To Grow Heavily
Tamasco Students Performed Final Funeral Rites, Burial Service Of Core Maths
Unbelievable: At The Airport Passengers Should Be Weighed Before Flying
The Day I Will Never Forget Is The Day I Had An Accident
Check Out Japan's Famous Aquarium Toilet
Woman Goes To Bed With Flat Stomach, Wakes Up With Baby Bump
Grandmom Gives Birth To Her Own Granddaughter
Dossiers Quotes Coronavirus
TOP STORIES