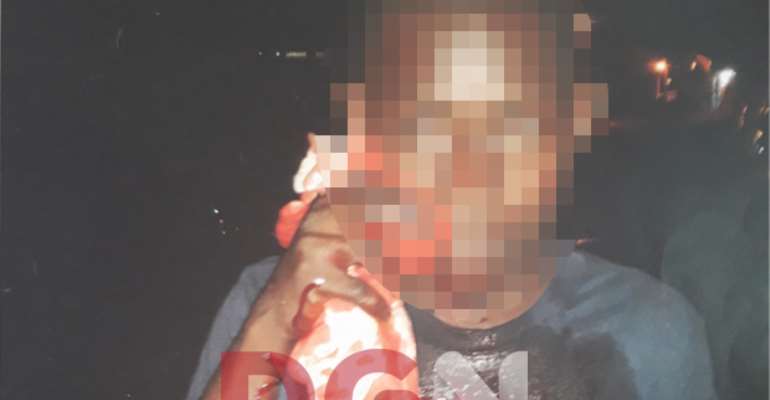 The victim bleeding profusely after the attack.

A 19-year-old labourer, who stabbed his victim in the jaw with a screw driver after stealing his backpack and mobile phone at Darkuman Nyamekye in the Greater Accra Region, has been remanded in police custody by an Accra Circuit Court.

Having an intention to steal, Yussif Abubakar is said to have gone to his victim's house when he was asleep; but he was detected.

According to the police, the accused hid himself behind a wall and later returned. He gained access to the room by damaging the door and succeeded in stealing the backpack and a Samsung Note 4 – both valued at GH¢1,190.

He was, however, caught by the owner of the items and this resulted in a scuffle between them.

According to the police, Yussif Abubakar initially stabbed his victim in the left side of his chest with a pair of scissors and then used a screw driver to stab him in the right jaw as well.

He was later arrested by some residents and handed over to the Darkuman police while a medical form was given to the injured person to attend hospital for treatment.

Abubakar was hauled before the court charged with five counts, including stealing, causing harm, unlawful entry and use of offensive weapon.

He pleaded not guilty to all the charges and the court presided over by Ruby Naa Ayikai Aryeetey remanded the accused person.

The facts of the case as presented by Inspector Samuel Ahiabor are that the accused on November 11, 2018, at about 4:30am, broke into the room of the complainant who saw him and shouted 'thief thief thief'.

According to him, Abubakar then scaled over a wall and hid himself but managed to get into the room minutes later whiles the complainant and others were outside looking for him.

The accused reportedly stole the backpack and the mobile phone but was met by the complainant when he tried to leave the room with the stolen items.