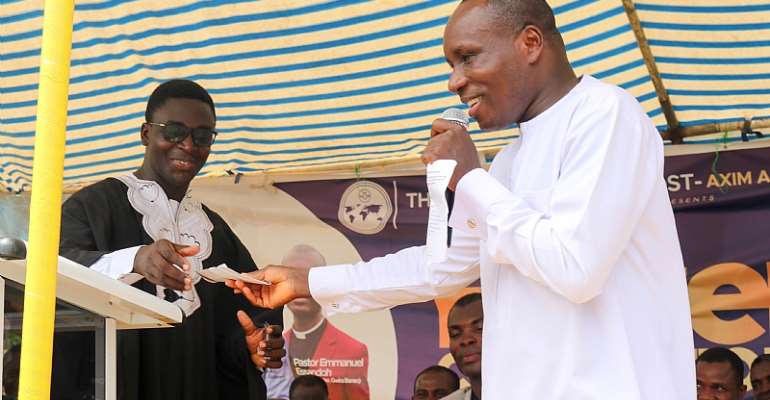 Speaking at the 2019 Easter Convention of The Church of Pentecost at Esiama and Asasetre, Mr. Bonzoh reminded congregants of the unity that has existed between he and the Member of Parliament for the Ellembelle Constituency, Emmanuel Armah Kofi-Buah even though who are “fiercely” political opponents.

“Not that I don’t want his seat. He knows I will take it come 2020. But we are two sons of the District first. I am an NPP DCE and he is NDC MP. Our different political orientation shouldn’t spin our heads against one another. That will not bring development the president brought me here to advance as DCE,” he stated.

Mr. Bonzoh, who is affectionately called 34 K-WA!, on two separate occasions asked congregants to pray for the President, himself and the Member of Parliament so that their leadership will lead to development in the District.

“… So lets pray for the President and his team for wisdom and strength to steer the affairs of this country towards prosperity. And pray for myself and our MP, Hon. Armah Buah too. He is presently God’s chosen MP for Ellembelle and I am the DCE. In some districts, it is common to see the two political leaders at each other’s throat which doesn’t foster unity and development. It is his time to serve the people. When his time is due come December 2020, he will hand over the baton to me to continue the service God wants for Ellembelle”.

He, therefore, warned against all forms of animosity, vilification and use of offensive language, “as this will impede peace and tranquillity the district wants for progress”.

At the Esiama convention which was jointly held by the Esiama and Nkroful Districts of The Church of Pentecost, the DCE donated GHC 2,000 to support projects initiated by the church.

He also donated GHC 2,000 at the Asasetre Convention, jointly held by the Asasetre and Gwira Ebanso Districts of the church for similar purposes.

The DCE was accompanied by some of the NPP Constituency Executives led by its First Vice Chairman among others.