﻿Time And Season For Wishful Thinkers 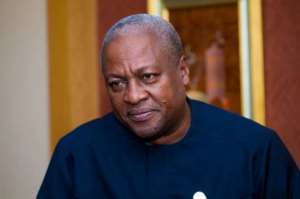 In my home town, when you tell somebody that he or she is forgetful and short-sighted, it is termed as 'insult'. In other words, you imply the person has no memory. In fact, a forgetful person does not reason and it is always a waste of time to discuss important issues with such a person. Forgetful persons do not know where they slept the previous night or the food they ate the previous day.

Mr. John Mahama looked into the faces of Ghanaians in the run-up to the 2016 general elections and told us that we are forgetful and short-sighted. We kept silent and on Election Day we trooped to the polling stations to show him that we were not forgetful and short-sighted as he thought. He received the shock of his life when more than one million Ghanaian voters voted against him.

In our kingdom, we do not take it lightly when someone tells us that we are ungrateful. To us, an ungrateful person is like a chicken. When you throw a corn to a chicken and it eats it, it later wipes its beak with the sand. It would never thank that one who threw the corn to it. Our elders always taught us to be grateful for the small favours people do for us. We are cultured and make sure we thank God for small mercies. Due to the fact that the people of the Ashanti Region consistently vote against the NDC, Mr. Mahama went to the Ashanti Region in the run-up to the election to meet members of the NDC and told them not to mind the people of the region because even if you tarred the whole streets of Kumasi with gold, the people there would still be ungrateful.

In 2012 and 2016, Mr. Mahama had a blank cheque to insult Ghanaians, using words like 'baloney', 'foolish', 'silly' etc. but no one ever responded to his insults because we knew when to throw one stone to bring him down. He paid dearly for the insults at the polls.

He has started again. This time around, he is using threat as a political weapon to silence the NPP. Hear some of his utterances: “We will match them boot for boot”. “If it comes to unleashing violence, no one can beat us because we have revolutionary roots”. “We will not countenance their nonsense anymore and we will show them where power lies”. “Nothing, absolutely nothing can keep us from marching to the Flagstaff House”.

This desperate politician and his cohorts continue to speak as if the world is on their shoulders. They even don't know where power lies. They have forgotten that we have the Commander-in-Chief of the Ghana Armed Forces in the person of President Akufo-Addo, who can move troops, order a State of Emergency or sign a military pack with a neighbouring country.

The other day when Mr. Ofosu-Ampofo was hauled to court for threatening the security of the nation, I saw the ex-president in the courtroom with ordinary Ghanaians who were also at the court. If I had his mobile phone number, I would call to tell him where power lay. Why was he not given a special chair to sit on as a former Head of State? That is how the world is. If you wake up too early, the dew of dawn will sock you.

Those who are pushing Mr. Mahama into the ring are deceiving him. They are not telling him the truth. They keep on telling him that Ghanaians will vote for him to come back to power and he believes it. The guy is not smart enough. He made money in politics and those who are pushing him so hard to go for the gold are rather seeking to have their share of his booty. Instead of leaving the stage while the ovation is loudest, Mr. Mahama wants to leave the stage when the booing is loudest.

Eric Agyei, the Bono NDC Communication Officer, has declared a proxy war and he must be ready for the worst. In other words, he should go for a crush helmet, else he will one day go home with a bloody head injury. The other day, I was listening to him on UTV when he took Omanhene Kwabena Ashane of Adom TV fame to the cleaners. His problem was that Omanhene referred to Albert Adongo as a joker when he (Adongo) tried to bastardize Dr. Bawumia after his presentation at the Town Hall meeting held recently. He was fighting Adongo's fight for him.

Much as Adongo tried to destroy Dr. Bawumia, he ended up messing around since he could not present anything reasonable to the good people of Ghana. Eric Agyei – an upstart in the Ghanaian political landscape – decided to fight Adongo's fight for him and took Omanhene Kwabena Asante to the cleaners.

Listen to him: “If you practise your journalism in your village and you find yourself in Accra and decide to attack the persona of individuals, we will not spare you. Who is Omanhene to attack Adongo? What knowledge does he have to attack a personality like Adongo? Can he even manage a radio station? I want to serve notice that any journalist who will play the fool will be met with boot for boot”.

Oh, so it has come to this! Then Agyei should start lacing his boots because we the journalists in this country are ready to pick the gauntlet and we will see the loser at the end of the battle. After all, as journalists, we have nothing to lose since we are not seeking to hold any public office. You can't stay in Rome and strike with the Pope!

There are people like Agyei who moved from their villages to live in Accra and have the funny and absurd feeling that Accra is synonymous with Ghana. I knew Omanhene Kwabena Asante from his days at Classic FM in Techiman to Radio Gold in Accra for more than twenty years and I sincerely know the stuff he is made of.

In fact, the difference between Kwabena Asante and Eric Agyei is very far. The former is a tried and tested journalist who has made his mark in journalism and so for a 'little ant' like Agyei who also comes from a village in the then Brong Ahafo Region to treat him the way he did is disheartening. Apart from a few indigenes in Accra, a greater number of all those who live in Accra come from one village or the other. If this is the way the 2020 campaign is going to go then I will admonish the NDC to quickly drop this guy from their communication team because he will put sand into their gari. I will admonish Omanhene Kwabena Asante to just relax because he has enough visibility, recognition and respect in relevant quarters. I also respect him a lot.