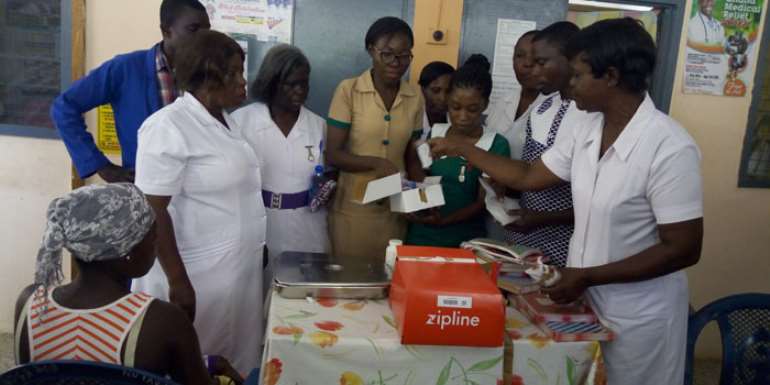 The official opening of the country's first medical drone centre at Omenako, Suhum, in the Eastern Region will take take shape today after a successful final test delivery.

The ceremony, to be chaired by Vice-President Dr. Mahamudu Bawumia, will see the commencement of the delivery of essential medicines like vaccines and blood on-demand to over 2,000 health facilities across the country through the use of drones.

The centre, operated by Zipline, is the first of its kind and would deliver essential medicines through the drones to remote areas of the country.

Zipline has already organized the initial testing and diagnostic flights from its first distribution centre. Journalists yesterday witnessed the final test delivery to the New Tafo Hospital in the Eastern Region.

The drone technology delivered a polio and yellow fever vaccine to the hospital in a red box using a parachute at the landing site. The polio vaccine was administered on a little girl who was brought to the hospital by her mother.

The first delivery of medicine via the drone technology operated by Zipline would be made to the same health centre during the ceremony.

It would be recalled that government, in 2018, approved the operationalization of Zipline's drone technology to deliver drugs and blood to health facilities in rural areas of the country amidst concerns by the Minority in Parliament over the contract.

However, Parliament approved the deal after several deliberations which ensured the commencement of the project.

Health workers place orders by text message and receive their deliveries in 30 minutes on the average.

The Zipline's drones take off and land at distribution centres which require no additional infrastructure at the clinics.

Deliveries are made from the sky, with the drone descending to a safe height above the ground and air-dropping medicine by parachute to a designated spot at the health centres it serves.

The service will operate 24 hours a day, seven days a week to expand healthcare access and save lives.

So far, the GHS has selected 148 life-saving medical products to be stocked at Zipline's four distribution centres nationwide.

Zipline will guarantee delivery of those products upon request by any of the thousands of health facilities in the country.

Each of the four distribution centres will be staffed by a team of 35 Ghanaian engineers and logistics personnel and equipped with at least 20 drones.

In all, four distribution centres will be capable of making at least 600 on-demand deliveries a day.

The drones can carry 1.75 kilos of cargo, cruising at 110 kilometres an hour and have an all-weather round trip range of 160 kilometres.