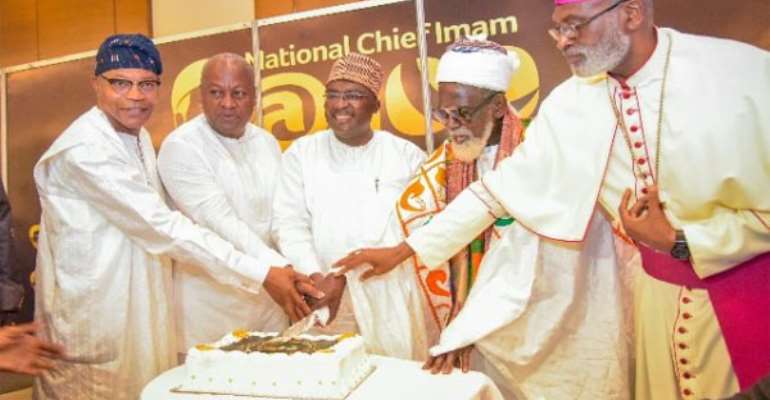 Special Representative of the United Nations (UN) Secretary-General for West Africa and the Sahel, Dr Mohamed Ibn Chambas is asking the ruling New Patriotic Party (NPP) and National Democratic Congress (NDC) to disband their groups forth.

He said: “Vigilantism remains a major threat to Ghana's democracy”.

He disclosed this in his keynote address at a lecture to commemorate the centenary of the National Chief Imam Sheikh Osman Nuhu Sharubutu, which was held yesterday in Accra as part of a series of activities.

The political parties, he said, must practicalise the ideals of Chief Imam in order to sustain peace in the country.

Mr. Chambas described the cleric as a champion of religious tolerance, born leader and unifier, whose actions have prevented a full-blown conflict in the country.

He, therefore, urged Ghanaians to support the 'birthday boy’ to continue with his good works to keep the peace in the country.

An overwhelmed Sheikh Osman Nuhu Sharabutu thanked Allah for his grace and mercies and expressed profound gratitude to the government and people of Ghana for the love and affection showed him.

It was all grace and splendor, as the National Chief Imam, Sheikh Osman Nuhu Sharabutu, turned 100 years yesterday.

The expression of love at the public lecture spoke volumes of a man, who is indeed revered and cherished by his nation and countrymen.

The event was held two days after the Chief Imam worshipped with Christians at the famous Christ The King Catholic Church in Accra as part of events commemorating his centenary.

Speaking at the event, which was chaired by the Metropolitan Archbishop of Cape Coast, Most Revered Charles Palmer Buckle, Vice-President Dr Bawumia, who eulogized the Muslim leader for his fortitude, said: “You find centenarians in bad health, losing their senses, bedridden or completely incapacitated. In most situations, centenarians are only blessed with long life but not good health at their advanced stage of life.”

“With Sheikh Osman Nuhu Sharabutu, Allah has bestowed a special rare blessing on him even at the age of 100 and sometimes I'm just very surprised that he's got very good health, very good memory, good eyesight and his very good hearing,” he added.

“In fact, Mallam is very fit at hundred and walks by himself; this is indeed a special blessing from the almighty Allah”, he said to chants of 'Allahu Akbar' from the ecstatic audience.

He, therefore, asked all Ghanaians to thank God for the great gift he has preserved for Ghana as a country, saying “Mallam, as our father is affectionately called, is without doubt a blessing to this country from God; as a man, his remarkable character and way of life epitomizes the Prophet Mohammed.”

He added that “his patience, humility, compassion and generosity reflect the noble traditions of the Prophet Mohammed … and as a religious leader, Sheikh Osman Nuhu Sharabutu has been at the forefront of championing inclusiveness among the various Islamic sects.”

Apart from that, he narrated: “He has also promoted interfaith dialogue between Moslems and Christians, which has ensured a peaceful co-existence between the two leading religions in Ghana.”

“At a time the world is experiencing religious intolerance leading to the killing of innocent people by extremists from both sides of the divide, who cannot tolerate the religious views of others; Ghana is enjoying a great collaboration between the two leading religions in our country.”

That, he said, was evident in his most recent historic visit to the Christ The King Catholic Church in Accra to worship with them on Sunday as part of activities marking his 100th birthday.

A group of Christians also paid a visit to the Chief Imam the next day to wish him well.