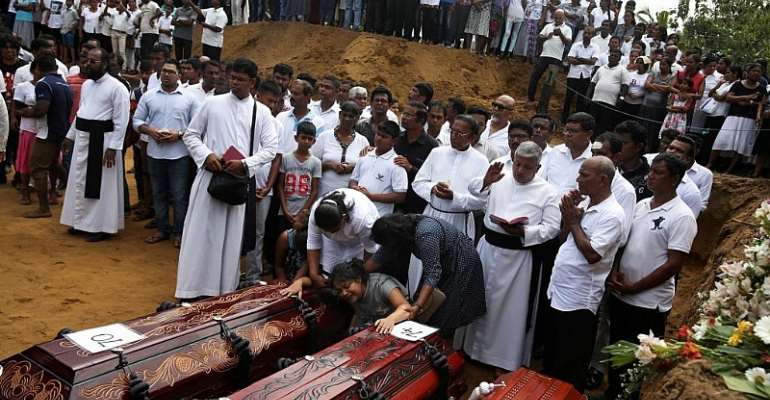 Sri Lankan police say they arrested 18 people overnight in connection to the Easter Sunday church attacks that left over 350 people dead. The US Embassy in Sri Lanka says the FBI is in the country to assist in the investigation.

Police spokesperson Ruwan Gunasekara said that 18 people were arrested in raids overnight between Tuesday and Wednesday using emergency powers introduced since the attacks, and 58 suspects are now being detained.

The Islamic State armed group claimed responsibility for the attacks. The government has blamed a local Islamist group, National Thowheeth Jama'ath, and said they were investigating whether the bombers had foreign help.

The deputy defence minister Ruwan Wijewardene said Wednesday that the death toll has risen to 359 people, including 39 foreignters. He said that one of the nine bombers was a woman.

He also said the government had evidence the bombings were carried out by an Islamic fundamentalist group in retaliation for the 15 March mosque shootings in Christchurch that killed 50 people.

New Zealand's Prime Minister Jacinda Ardern saud said Wednesday that she had not received any official information from Sri Lanka or seen any intelligence reports to corroborate the claims.

US assisting investigation
Speaking to foreign journalists at the US Embassy in Colombo, US ambassador Alaina Teplitz said that the US had "no prior knowledge" of a threat in Sri Lanka and that "clearly there was some failure in the system" for Sri Lanka before the bombings.

She said there was a "right-sized" team of FBI agents and US military officials helping the investigation.

The government has acknowledged it received warnings that a local extremist group was threatening churches. The prime minister said some people might lose their job over the intelligence failures.

President Maithripala Sirisena, who is also defence and law and order minister, said he would carry out a complete reorganisation of security forces and police.

"I hope to make major changes in the leadership of the security forces in the next 24 hours," Sirisena said in a nationwide address.