Tourism Minister Puts Smiles On Widows In Her Constituency 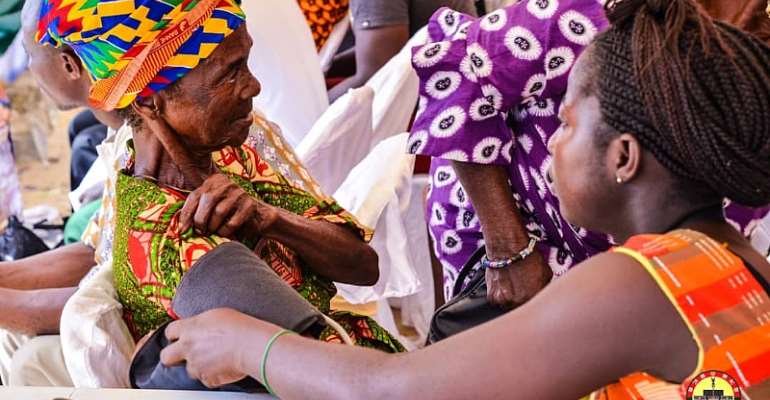 As part of the Annual Widowhood Charity Program under the Wassa Hemaa Foundation, the Member of Parliament for Prestea Huni Valley Constituency and Minister for Tourism, Culture and Creative Arts today feted and distributed various items to widows within her constituency, putting smiles on their faces.

In addition to her commitment to improving maternal and child health and promoting women's empowerment, the Hon. Minister has also made it a priority to support widows and the vulnerable in her constituency. This has been an annual event of Hon. Lawyer Barbara Oteng Gyasi. Today she hosted close to 500 widows from five Electoral Areas within Bogoso. Namely Bepo, Kokoasi, Atechem, Lion Street, Odumasi and Petepom Electoral Areas.

Similar events have been held at Huni Valley, Bogoso and Tarkwa Bremang for orphans and widows alike.

The celebration of International Widows Day which was Initiated in 2005 by the Loomba Foundation — whose founder, Mr. Raj Loomba, and president, Ms. Cherie Blair and whose motive is to draw attention to the world's widows is long overdue according to Hon MP. The Widows Day Celebration in the Prestea Huni Valley Constituency by the Hon MP is the first of it's kind in the constituency. It is a vital first step in promoting the protection and respect for the rights of widows across all regions and cultures.

According to Hon. Barbara Oteng-Gyasi it is an occasion to call attention to the challenges women in all countries face during and after the death of their husbands — whether elderly and alone, or young with young children to raise as a single parent and sole provider. In addition to coping with grief, they may find themselves for the first time without any social safety net.

Many of these women quickly find themselves living in poverty, even if they had not been before. Worldwide, statistics estimate that about 115 million widows live in extreme poverty, along with their children. In the context of armed conflicts around the world, as well as the HIV and AIDS epidemic, these numbers are increasing but thank God this does not prevail in the Prestea Huni Valley Constituency kind courtesy Hon. Lawyer Barbara Oteng-Gyasi

This reality presents an opportunity and a challenge to countries and the international community, and one which we must all seriously take it up.

The economic empowerment of women, including widows is a critical factor in the eradication of poverty, reaffirming that women, including widowed women, should be an integral part of our society where they reside. It is against this backdrop that Hon Barbara Oteng Gyasi has taken it upon her self to make widows also feel they are part of the society.

Firstly International Widows' Day itself provides an opportunity to pay tribute to the economic and social contribution of women, including widows, to their societies and, especially, to the unpaid work that they perform in various countries around the world including Ghana

The institution of the celebration of the International Widows Day our MP who also doubles as the Minister for Tourism, Culture and Creative Arts in our constituency is a reflection of the love she has for widows.

Hon. Minister who was represented by the Hon. Municipal Chief Executive (MCE) Mozart Kweku Owuh said given the opportunity, widows can be vibrant and valued members of the community, making their full contributions to their families and societies. Their potential as leaders in their communities also cannot be overlooked.

This is especially true in situations of armed conflict when many women are widowed and left homeless and with no source of support. I am committed to making sure that gender equality and women's empowerment will become a “lived reality" not just a mantra.

The MCE also applauded the MP for such an initiative and said this is the first time it is being celebrated in Bogoso. He touted some achievents of Hon MP saying he cannot mention all but highlited on the newly installed incubator at Prestea Government Hospital through the Kokrokoo charity Foundation at a cost of one Hundred Thousand (100,000 dollars), the upgrade of Aboso health center. Etc and advice that those who have attained the age of 18 years and above to register when the Electoral Commission commences the registration exercise.

Some of the beneficiaries thanked Hon. Lawyer Barbara Oteng-Gyasi (Mrs) and expressed shock that she did not discriminate and assured to give her the second chance to continue as an MP. The widows also took the rare apportunity to undergo health screening exercise.

Hon. MP's message was delivered by the Municipal Chief Executive.