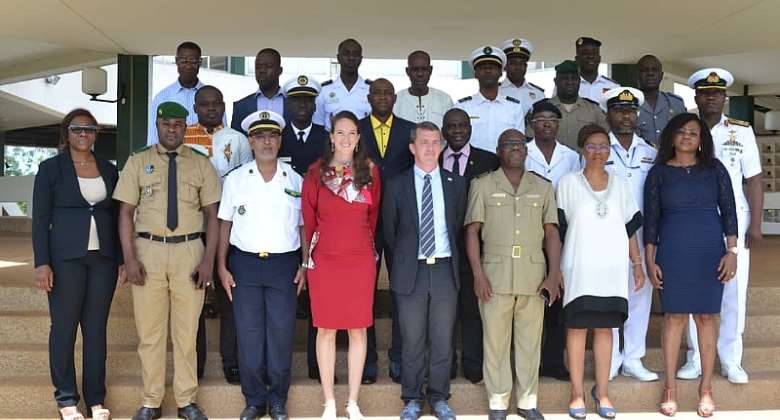 The Interregional Institute for Maritime Safety (ISMI) has deepened the capacity of maritime officers to fight against piracy on the seas.

Team leaders and flight personnel from the 12 West African countries were provided with the knowledge of law and criminal procedure so as to enable their interventions achieve the needed results.

As an institute that aspires to be a leading platform for maritime training in Africa, ISMI which held the seminar on 16 to 19 April in Abidjan, Côte d'Ivoire is part of the Regional Academy of Maritime Sciences and Techniques (ARSTM) resolve to keep the Gulf of Guinea safe.

Participants were empowered to carry out the procedures initiated against pirates and the necessary knowledge to operate within a perfectly controlled legal framework.

At the beginning of the session, the different speakers emphasized on the motivation that led the French Cooperation, through ISMI, to center the seminar on maritime surveillance.

The Director of ISMI, Abe Ake Lazare said the trend of maritime crime in the Gulf of Guinea is one of the most serious challenges to the regular provision of shipping services to ports and to the maritime economy in general.

“ISMI organised this training session on maritime piracy to aid in an effective fight against these maritime threats, with a particular focus on the judicial handling of OPJ violations,” Abe Ake Lazare noted.

The Regional Coordinator of the Action of the State of the Sea, Guillaume de Beauregard, noted that the threat of piracy is still high and prevalent hence, the need to empower officers with the necessary ability to tackle the canker on sea.

According to him, the first figures for 2019 are rather encouraging, though all specialists agree that the Gulf of Guinea remains a hot spot for piracy in the world.

For this reason, Guillaume de Beauregard added that ISMI, through its mission to promote a safe, secure, clean and sustainable maritime space in the Gulf of Guinea, had to address this issue.

“Furthermore, this phenomenon is now quite well identified, and its main causes are known (idleness of some coastal populations, lack of control means, inadequate legislation),” he intimated.

Guillaume de Beauregard believes that this is a guarantee that the training will eventually lead to firm and dissuasive sanctions.

This seminar will also provide an opportunity for discussion to spot out strengths and weaknesses in regulatory procedures and know-how within the participating States.

A short procedural guide was issued to visiting team at the end of the training which highlights a summary of good practices but also a useful guide for teams in the field.

The seminar was organized and financed by the French Cooperation through the regional program to support the action of the state of the sea in the Gulf of Guinea with the support of the Ivorian State.

ISMI provides training that meets the needs of the Gulf of Guinea States in the field of maritime safety and action of the state of the sea. Its headquarters is located in Côte d'Ivoire, within the Regional Academy of Marine Sciences and Techniques (ARSTM).