The Role Of Russia In Solving Crisis In Sub-Saharan Africa 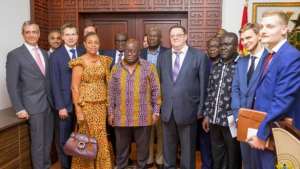 The Russian Federation is firmly committed to the goals and principles of partnership with Africa, and actively participates in providing integrated assistance to the continent both on a bilateral basis and within the framework of existing international mechanisms.

In accordance with its status in the UN Security Council, the Russian Federation is widely involved in work to unlock crisis situations in this region, including in the formulation of a strategy for resolving armed conflicts within the Security Council and the definition of the mandates of relevant peacekeeping operations.

Russia contributes to alleviating the debt burden of African states. To date, the main debt of African countries has been written off - more than $ 20 billion. Under the debt-for-development program, intergovernmental agreements are being implemented with Zambia, Madagascar, Mozambique, and Tanzania.

African countries are granted broad trade preferences and a preferential customs-tariff, which applies to the bulk of Russian imports.

Russia makes contributions to international programs to assist African countries, under the auspices of the World Health Organization, the World Food Programme and the International Civil Defense Organization (ICDO).

In August 2017, in the framework of the Russia-UNDP, Climate Window Trust Fund Program, it was decided to allocate about $1 million of the Fund’s resources for the implementation of the project “Support for Zimbabwe" from 2018 to 2020.

Close attention is paid to the training of African civilian specialists and currently, about 15,000 are studying at Russian universities.

In addition, on the basis of Russian specialized institutions, law enforcement officials from African countries are given the opportunity to study in higher education programs, as well as training in short-term refresher courses.

Russia continues to make a significant contribution to countering the overall threat of pandemic diseases in Africa. The government is among the first to respond to the epidemic of Ebola hemorrhagic fever, in the West African countries and provided specialized assistance.

The total amount of Russian assistance to international and national efforts to combat Ebola and its consequences amount to more than $ 60 million. Currently, Guinea has a Center for Microbiological Research and Treatment of Epidemiological Diseases, built and equipped by UC RUSAL.

In February 2017, the Russian-Guinean Research Center for Epidemiology and Prevention of Infectious Diseases was opened at its base, in which it is planned to begin testing the Russian anti-vaccine.

In September 2016, at the request of the Guinean government, more than 5,000 doses of Russian cholera vaccine were handed over to the authorities.

In March 2017, a gift of measles vaccine from UC RUSAL was given to the National Sanitary Safety Agency of The Republic of Guinea.