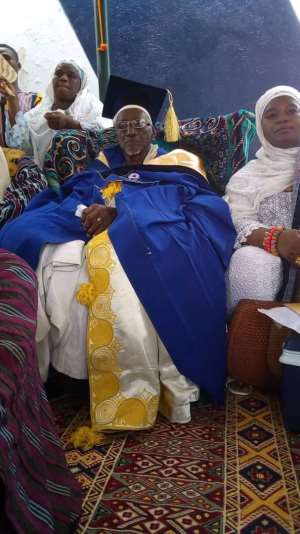 An honorary Doctorate and Professorship was conferred on the king at a colourful event organized by the university in Damango.

The award, according to the university, is in recognition of his dedication to progress and Development of Gonjaland and the nation at large.

The event brought together all Paramount Chiefs of Gonja Traditional Area as well as sons and daughters of the land including former President John Dramani Mahama and other top government officials.

Speaking at the ceremony, the special delegation from the Ukrainian based university praised the overlord for his dedication to progress and development especially in the area of peace.

The spokesperson for the Gonjaland Traditional Council, Mr Abutu Kapori on behalf of the overlord thanked the Ukrainian University for the award and assured the delegation that Yagbonwura will continue to do more to bring development to the doorsteps of his kingdom and Ghana as whole.