Opposition’s sharp criticisms will not shake us – Bawumia 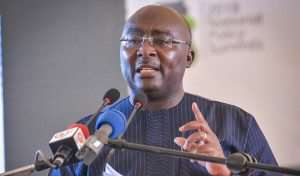 Vice President, Dr. Mahamudu Bawumia has indicated that the governing New Patriotic Party (NPP) will not succumb to what he calls blind criticisms from the opposition.

He says comments from government's critics are aimed at denting the good development projects being carried out by the government of President Nana Akufo Addo.

The Vice President who was addressing a Mini Durbar of party faithfuls at Obo Kwahu in the Eastern Region after a unity walk said it is crystal clear the NPP's policies such as the Free SHS, 1D1F, one village -one dam, policies of are good for Ghanaians.

“We will leave no room for hypocrisy. We have not yet finished. There is more to be done but we don't want to listen to those who tell us that Free SHS is not good, teacher and nurses trainee allowance is not good, NABCO is not good. No! We are going to follow the vision of the Nana Addo Dankwa Akufo-Addo.”

President Nana Akufo-Addo has said he will fulfill every promise he made to Ghanaians to put his critics to shame.

Nana Addo noted that since he took over the administration of the country, his government has initiated a lot of social intervention programmes to reduce the unemployment rate in the country.

He said his opponents were unable to do what they were supposed to do when they were in power and therefore doubted whether the NPP government would be able to fulfill its promises.

“On the creation of the regions, you are all aware my opponents said I was only deceiving Ghanaians to get votes. Have we not created the regions? We said Youth in Afforestation and Planting for Food and Jobs, we have done them. Whatever I promised they said I cannot do it. I always get headaches when I hear people saying this. I am going to fulfill my promises one after the other to shame my critics,” Nana Akufo-Addo noted.

Former President John Dramani Mahama has suggested that the NPP government's claims that it is managing the economy effectively are mere propaganda, insisting that the current administration's 'lies' will be exposed by the realities of the lives of Ghanaians.

Mr. Mahama, touted his government's achievements during their tenure, adding that the NDC had capable people managing the economy while mounting a strong defense for his former appointees.

He said; “You can do all the lies and the propaganda of the economy you like, the reality of the people's lives will expose you.”