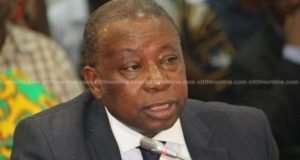 “It is worrying that almost every radio or TV station air advertisements on herbal medicines and I wonder whether those adverts have been approved by the FDA in view of the claims that are made within those adverts.”

The Minister of Health, Kwaku Agyemang Manu has asked the Food and Drugs Authority (FDA) to examine all advertisements, especially claims made by herbal medicines so as to be sure they are approved by the Authority.

“Let us remember that advertisements are very influential and have the potential of affecting listeners positively or negatively. Therefore, a misleading advertisement can have serious repercussions,” the Health Minister said in a speech read on his behalf during the unveiling of the new FDA logo in Accra.

According to him, the Authority must ensure effective post-market surveillance to ensure that products on the market were safe, efficacious and of good quality.

He commended the FDA for consistently alerting the general public on products found on the market either to be a counterfeit, substandard, or unwholesome.

He gave the assurance to the FDA of the government's full support to ensure that the Authority fulfilled its mandate by ensuring the protection of public health and safety at all times.

“If we don't act now to stop this pollution, the future of our planet would be jeopardized. We must make every effort to Reduce, Recycle and Reuse plastics and plastic materials,” she stated.

The launch of the FDA's new logo was to give the Authority a new corporate identity towards effective regulation of food safety and public health.

Covid-19: Read IMANI’s Perspective On Getting Economy Alive
2 hours ago