US 'encouraged' in Sudan, sends envoy 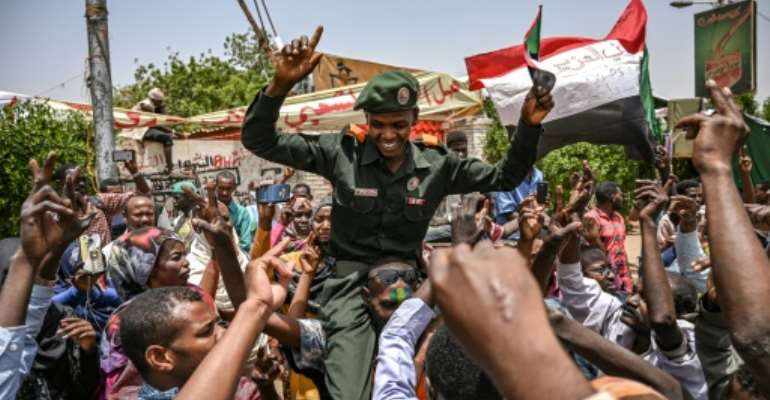 A Sudanese soldier joins protesters outside the army complex in Khartoum. By OZAN KOSE (AFP)

The United States on Thursday praised orders by Sudan's new military leader to free political prisoners and end a night curfew as it dispatched an envoy to Khartoum to encourage a transition to democracy.

Makila James, the deputy assistant secretary of state who is in charge of eastern Africa, will head to Khartoum this weekend, an official said.

State Department spokeswoman Morgan Ortagus said that the United States will "calibrate our policies based on our assessment of events" but added that talks on delisting Sudan as a state sponsor of terrorism remained suspended.

"We are encouraged by the decision to release political prisoners and cancel the curfew in Khartoum," Ortagus said in a statement.

She said that the United States wanted the military council and other armed units to "show restraint, avoid conflict and remain committed to the protection of the Sudanese people."

"The will of the Sudanese people is clear: it is time to move toward a transitional government that is inclusive and respectful of human rights and the rule of law," she said.

General Abdel Fattah al-Burhan, the second leader to take charge in the week after the coup, ordered the release of prisoners jailed by special emergency courts and lifted a night-time curfew.

He promised to "uproot" the legacy of Bashir's regime, although military rulers say they will stay in charge for two years.

A senior US official, speaking on condition of anonymity, said that the short-term US goal was to "get the military folks out of center-stage" and "back to being responsible for security, nothing else."

"Longer term is to make absolutely sure that whichever group is going to be responsible for the transition prepares a transition implementation that will lead to a truly democratic government that will reflect the will of the Sudanese people," he said.

The official did not specify whom James would meet in Khartoum but said, "the US engages with everyone."