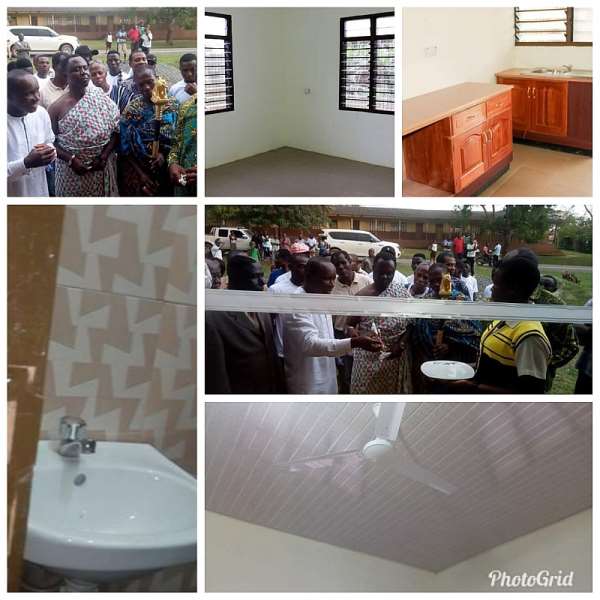 The Ellembelle District Assembly of the Western Region has handed over a staff bungalow with other ancillary facilities to the Nkroful Agricultural Senior High School (NASS) to motivate the teaching staff.

The construction of the staff bungalow came as a result of the accommodation problem which was a major challenge for so many years.

Handing over the facility on behalf of the Assembly, the District Chief Executive (DCE) for the area, Hon. Kwasi Bonzo popularly known as Ellembelle David thanked the school management for their support to ensure the project is complete on schedule.

He said the facility will contribute tremendously towards the development of the school and improve effective teaching and learning in the school.

He added that staff accommodation problem is not helping teachers to execute their responsibilities satisfactorily but assured that government is committed to addressing the problem facing the educational sector.

The DCE charge the school management to maintain the edifice inorder to ensure it last longer to achieve its intended purposes.

The DCE also cut the sod for the construction of a 12-unit classroom block for the school.

The project, which is estimated at One million two hundred and fifty thousand Ghana Cedis (1.25 billion old Ghana Cedis) is funded by the GETFund expected to be completed within six months.

The two-storey building project, when completed, will be equipped with dual desks in each class.

It is being executed by the Legacy Construction and Engineering Limited.

The Headmaster of the school, Mr Michael Kwame Wurah expressed his appreciation to the DCE and the Assembly for putting up the bungalow.

"We want to assure you that we will take maintenance culture into consideration and let the edifice to last longer to achieve its intended purposes", he pledged.

He continued, "I am very happy as a Headmaster of this school because accommodation of my teachers has been my headache because the existing facility is not enough to accommodate more teachers so with this new structure, my teachers will be grateful to have a better and comfortable place to sleep."

According to him, due to the implementation of the Free SHS programme, the student's population has increased to 1,500.

"Currently we are facing furniture problem because the number of the students has increased to 1,500 and we expecting the number to be increased in the coming academic year due to the Free SHS programme and we are appealing to the DCE to help us with 400 furniture ", he said.

On his part, the Chief of Nkroful, Nana Kwasi Kutuah IV, also thanked the District Assembly and the DCE for the honour done them and the school.

He commended the DCE for the wonderful work he has started and urged him to do more for the school and other schools.

He urges the management of the school to maintain the facility to last longer.

The DCE was accompanied by the District Director of Education for the area, Mr Ackah-Blay Quayson, some staff of the Assembly, some Constituency Executives of the NPP, the media among others.

I don’t know him – Afoko denies knowledge of prosecution wit...
35 minutes ago