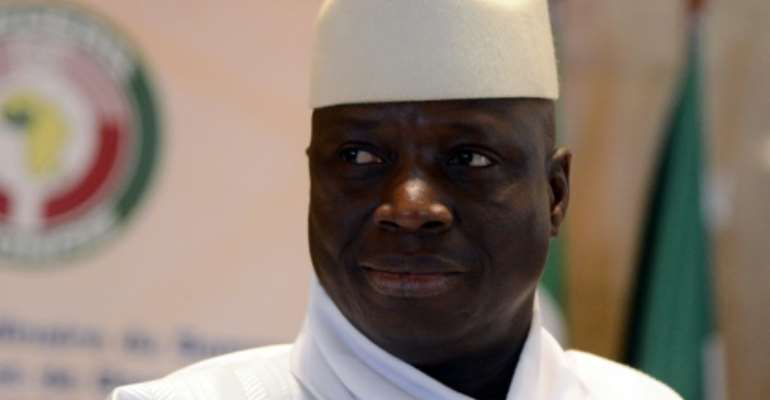 Jammeh, pictured at a West African summit in Ivory Coast in 2014. By ISSOUF SANOGO (AFP)

Remains of seven Gambian soldiers who took part in an attempt to overthrow dictator Yahya Jammeh in November 1994 have been exhumed as part of probe into the country's troubled past.

After a nearly two-week search at a barracks at Yundum, about 30 kilometres (18 miles) from the capital Banjul, investigators "exhumed the skulls of seven military personnel executed 25 years ago," the Truth, Reconciliation and Reparations Commission (TRRC) said in a statement late Wednesday.

The attempted putsch in the tiny West African state came just a few months after Jammeh had seized power, overthrowing the democratically-elected government.

Jammeh himself was forced out of office after losing elections to Adama Barrow in December 2016.

He went into exile in Equatorial Guinea in January 2017 after fellow West African states intervened militarily.

About two dozen military men were executed in November 1994 following the move against Jammeh.

â€œWe will continue digging until we see the other skulls," forensic archaeologist and crime scene investigator Thomas Gomez was quoted by the TRRC as saying after Wednesday's exhumation.

"We cannot tell who are here, but all we can tell you is that seven people were buried in this grave. Seven pairs of underwear were also recovered and this could attest to the fact that they were almost half-naked when they were being buried."

Relatives of the soldiers were present when the skulls were recovered.

The TRRC, modelled on South Africa's post-apartheid Truth and Reconciliation Commission, seeks to shed light on Jammeh's brutal 22-year reign in the hope of providing justice and closure for victims.

It began its work last October, empowered with the right of investigation and recommendation for prosecution or reparations, but not to pass sentence.

Perpetrators and witnesses told the TRRC that the execution of the coup soldiers was overseen by the junta's No. 2, Lieutenant Sanna Sabbally, on the command of Jammeh himself.

Jammeh fended off several other attempted coups during his long reign, including a bid in December 2014.

One of his most feared instruments of power was an ultra-loyal death squad known as the "Junglers," whom the UN and rights groups accuse of murder and torture.