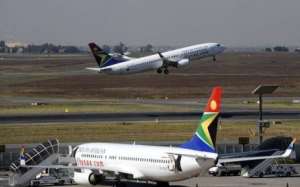 South African Airways (SAA) insiders say retired and resigned pilots, now employed by other airlines, still receive benefits from SAA due to an evergreen agreement contract from the ’90s. All these pilots still belong to Bidvest, a company that gets the lions share of the SA Airways procurement budget.

I have been reliably informed that the benefits of the evergreen agreements include cars and garage cards from SAA. In terms of these agreements, “they bump off paying passengers” during the December holidays, contributing to SAA’s R400 million loss last year.

The benefits they allegedly continue to receive after resigning or retiring include flying for free. Their girlfriends, ex-wives and distant family members also receive these benefits.

An SAA executive said yesterday they have posted an actual loss of R1.5 billion, not far off the budgeted R1.4 billion, and far lower than R5.6 billion in the previous year. But he said they are working towards ensuring the airline remains sustainable.

Asked if the pilots who have recently resigned and their girlfriends, ex-wives and extended family members will still receive benefits due to evergreen agreements, Zwane could only say: “We are currently engaging with pilots to review and to look what’s happening with the

evergreen contracts and something will come out of that.”

Furthermore, according to confidential SAA documents leaked to the newspaper, R52.9 million of taxpayers’ money was spent on accommodation and crew rest facilities in January alone.

The insiders said “no pilot will leave SAA because of SAA”. “They love SAA because SAA gives them benefits that no other airline can give them … “Those agreements are unconstitutional and are against the labour relations of this country. They are also unfair to other employees of SAA.

Now my response to Clever Blacks insistence that it is not white monopoly capital but parastatals that hold the South African economy in a stranglehold and hold up transformation.

The racial undertone is basically that the state (black) cannot manage the economy or parastatals and that therefore they should be privatised, in other words handed over to global monopoly capital and blacks can participate as 27% minority shareholders under the paternalistic tutelage of foreign management and majority ownership. Of course Washington, the IMF and the World Bank will call the shots. What a sellout!

This is not unique. Everywhere in the global South the same narrative is playing itself out. The people of the south are (not white) are like "children" (in this racist framework) and they must be tutored in how to manage a free market economy by the global North. The vehicle for this tutelage is the multinational corporation and various capitalist foundations. It is a way to deconstruct the state in the South and place these countries under direct corporate rule. The people of the South are left with states that are empty shells with no economic content and the only function they have is labour control and population control to facilitate the flow of resources and minerals to the global north.

Capitalism is in crisis, it can no longer rely on war or on shopping to get itself out of the doldrums. Globally we are running out of minerals and resources both of which are insatiably consumed by the system which is driven by competition and growth. Maintaining first world standards of growth depends on a new form of colonisation of the South through corporations. Instead of admitting that the system is failing they are looking for new ways to squeeze wealth out of us. Hence the attack on our state assets in the South.

Our governments in the South are complicit in the process. They run down state assets with the express purpose of privatising them, hoping that people in the ruling party can be rewarded

with shareholding or board membership once state entities go into private hands. The same narrative is playing itself out in India, Brazil, Pakistan, Ghana and elsewhere.