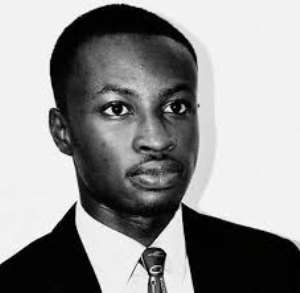 Dear Comrade Adu-Baah Charles,
I bring you warm greetings. I should also congratulate you warmly on your overwhelming victory in this year’s SRC presidential elections ahead of your contenders. Your ambition to lead KNUST which has been in embryo for long is now met and this is exemplified in your 65.96% votes against your contenders’ which is more than someone's four years CWA. This is unprecedented and therefore, I congratulate you on winning the election.

I am no person to toot my horns neither is it even compatible with my status to preempt your vision for KNUST but your unprecedented victory tells me in aggregate terms that the students of KUNST repose trust and confidence in your flagship policies and interventions. Therefore, I am all that surer you don’t have any reason to suppose you can fail the students in your administration.

As a writer, permit me to share with you some hard truths you can go by. Comrade ABC, it is always of pained conscience when a group of persons entrust power unto one person and such a person turns around and betray the trust. St. Paul reminds us that when good leaders are in post, the people rejoice but lament when bad leaders are in post. This means the saint themselves also like good leadership and we must exhibit it wherever we go. As you have assumed this enviable and high office, be informed that KNUST looks up to your actions and inactions.

Do not take offence in the Kelvin Sah-led administration which you have come to succeed. KNUST is not poor, KNUST is rich, it is about leadership (SRC) and the student body chose you among the six "wise men" (aspirants) because they have seen you as one who can rejuvenate their fallen hope. You did not win the election because students like the famous name called ABC? No! as you have come, kindly pay attention to the serious developmental issues that are fundamental to KNUST and don’t for once lament on previous leadership. A man whose house is on fire does not pursue rats.

Comrade ABC, one distinguished Kenyan Prof. of public law, prof. Patrick O. Lumumba said something very pleasant. He said “the first thing African leaders do on assumption of power is the primitive accumulation of wealth so much so that they do not know where such property and wealth are”. It is no wonder that KNUST student leadership system is suffering from the constipation of corruption. A strange message of salvation is needed to save it. Our society nowadays revolves around money but when it comes to the subject of money, Comrade, man must play safe though there is no perfection anywhere in this world. Let KNUST not have the grief of seeing you unable to exhibit that which you have promised “students matter most “. Leadership is not about personal life. Need I say more about some leaders? No! I do not think so. Comrade, KNUST does not actually prefer bones to meat, it is just that no one ever gives them meat. J.B Danquah wrote these lines: “leadership is not a treasure in post but a selfless devotion to the service of mankind” it is certainly not be the intention of God that some stomachs (students) remain empty while others are overstuffed. Embanon! You are a good friend and I know that, but the truth is that people change when they are given power.

Remember last year you aspired to lead KNUST but your enemies did not allow you. You have come back with good policies and dreams that can liberate every single issue that students face on campus. I am a policy analyst and can testify that all your policies are feasible and achievement and try as much as possible not to fail the students. You have seen the support the final years including TAs who suffered in the sun just to gather votes for you. Remember those who did not go for lectures just because they wanted you to lead them to the promise land. I therefore employ you not to joke at all in achieving that which you have promised the students. You have gained wide endorsement from many people and for the first time in the history of KNUST, I have never seen this kind of acceptance before.

Comrade ABC, I know and need no reminder that you were selected among the six (6) wise men (Fidelis, Sesah, Ampah, Ali, etc. and you yourself) for the quality of your competence, alertness, soberness, industrious and the likes. I know your personality has ever been celebrated both far and near when you became the best student in the Department of History and Political Studies, level hundred, your service to the College of Humanities and Social Science. I have known your strength and desire to assist others and do believe you still have those traits. You will then require the co-operation of your other executives elected and would-be appointees to take KNUST to the highest height.

Remember that pragmatic leadership with alacrity is a sine qua non to you. A good leader is one who is committed to excellence. He delegates powers and assumes a backseat role. Be steadfast and don’t allow external forces to put you under time pressure or use a stopwatch to start and stop you in your helm of affairs. Never! Not you! Then you better give up the presidency and return to the village than being a KNUST president and entertain the rot of corruption and maladministration. Just know your senior, Mr. Aziba is advising you.

Comrade, criticisms are not new and they will follow where the rest have gone. Be ready at the very least to accept constructive criticisms, they are part of the journey. You will make mistakes but you must be quick to correct them because good and brave leaders are not lazy. “A man who has committed a mistake and does not correct it is making another mistake” the very words of Confucius - Chinese philosopher. I am aware that you really cannot please everyone in KNUST in your reign but remember that if you give bad food to your stomach it drums for you to dance. Should your administration fail KNUST, do not expect the students to do you any courtesy. Do not allow the students to point accusing fingers at me too because I was also part of those who stood strongly for your victory. If you administrate well, Adu-Baah Charles, it will be music all along and ty not to listen to the promptings of detractors.

All too soon, Comrade Charles, he who thinks he is leading and has no one following is only taking a walk – The Malawians have said it all. May the Lord keep you safe in your vision to rejuvenate and restore hope in the students of KNUST especially the level hundred students who have been unfairly treated by the Sah-led administration (the demonstration I mean). I love you so much and I wish you well in your quest to govern well.

I always stand for the interest of the people and together we shall fight for the change that we deserve. Be part of the team ABC for he has a lot to give KNUST.