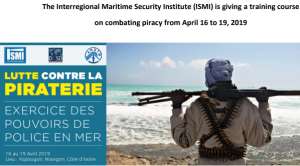 The Interregional Maritime Security Institute (ISMI) has organised a training course for sea authorities to deal with piracy attacks from April 16 to 19, 2019 at Youpogon, Niangon, Cote d’Ivoire.

In a statement issued by ISMI, the seminar is aimed at providing boarding team leaders and seafarers authorised to record the offence of piracy and armed robbery at sea with knowledge of the law and criminal procedure so that their interventions can lead to the conviction of the perpetrators.

ISMI noted that the seminar will strengthen the capacity of Gulf of Guinea States to combat piracy.

According to ISMI, the Gulf of Guinea countries have therefore made the fight against piracy and armed robbery at sea one of their priorities, acquiring several tools for regional cooperation in this area: the Memorandum of Understanding of the Sub-regional Integrated Coast Guard Network of West and Central African States, the Code of Conduct on the Suppression of Acts of Piracy, Armed Robbery against Ships and All Unlawful Maritime Activities in West and Central Africa, and the African Charter on Maritime Safety and Security and Development in Africa.

ISMI added that despite these efforts, piracy and armed robbery against ships are the most significant threats when it comes to maritime security.

It stressed that the piracy threat remains very high. After reaching its lowest level in 22 years with 180 attacks worldwide in 2017, the International Maritime Bureau (IMB) noted in its latest annual report a significant increase with 201 attacks recorded in 2018.

ISMI stressed that this upsurge is mainly in the Gulf of Guinea which accounted for 40percent of all recorded attacks worldwide in 2018, more than half of which occurred off the coast of Nigeria.

It added that crew abductions in 2018 took place in the Gulf of Guinea. Since 1 January 2019, the IMB has already identified more than 20 attacks or attempted attacks in the region.

ISMI emphasised that piracy and armed robbery at sea are a major concern for the sub-region considering the number of actual incidents in this area is "significantly higher" than reported.