Takoradi Kidnapped Girls: Go And Bring Them If You Know Their Whereabout—Concerned Mothers To CID Boss 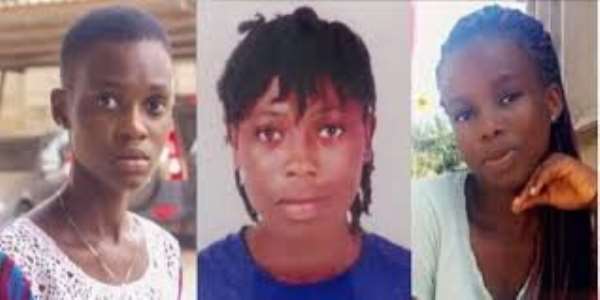 The statement adds that the families have been psychologically affected since the girls’ disappearances. “What we want to see is our girls and not unnecessary press conferences.”

The first of three to go missing was Priscilla Blessing Bentum, a 21-year-old who was kidnapped on 18th August 2018. Ruth Love Quayson and Priscilla Mantebia Koranye went missing shortly after.

The Association is appealing for the government to intervene. They are specifically calling on the First and Second Ladies of Ghana, all women in Parliament, the Attorney General and the Chief Justice to take action.

“Put [yourselves] in the shoes of the affected families and push for the girls to be reunited with their families. FEEL THE PAIN, WE WANT RESULTS.”

Read the entire statement below:

Press Release by Concerned Mothers Association of Ghana, a women based group with focus on issues bothering women and girls.

As Concerned Mothers our attention has been drawn to the fact that the CID Boss, now COP Tiwa in press conference exactly two weeks today indicated that, the Police through diligence have managed to locate the 3 Kidnapped girls and further described them as safe.

We believe that if the Police as mentioned by the CID Boss has been able to locate where our kidnapped girls are, then we are demanding that the CID without any further delay BRING BACK OUR GIRLS. By their pronoucements if we do not hear of the release of our girls,then we shall suspect that they have a hand in what is going on and should stop disturbing the families and the public.

This problem has affected the families pyschologically and the police and the CiD should do what they are supposed to do and BRING BACK OUR GIRLS What we want to see is our girls and not unnecessary press conference.

The first girl Priscilla Blessing Bentum, 21 years was kidnapped on the 18 of August 2018 and for the past 242 days nothing has been heard of her while 18 and 15 years old Ruth Love Quayson and Pricilia Mantebia Koranye have been gone for 134 and 117 days respectively.

We are further and again appealing to our First and second ladies as well as the women in Parliament and the Attorney General and Chief Justice to put themselves in the shoes of the affected families and push for the girls to be reunited with their families better still for the Police to brief the families on what us keep them from releasing the girls.

FEEL THE PAIN, WE WANT RESULT.