Dr. Bawumia: The Name They Fear To Hear 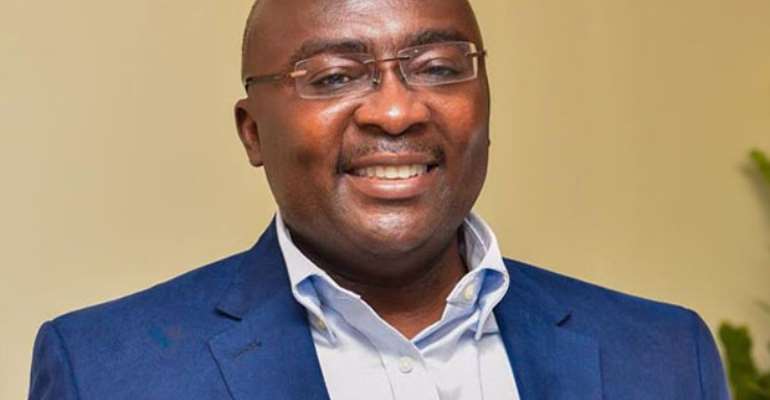 Unfortunately, Ghanaian scientists could not store the genes of Professor K.A. Busia at the laboratory for future studies. Apart from the books that he wrote, we allowed the man to die and we buried him without storing his genes for future studies to ascertain why he was so brilliant. As students, we used to call him Best University Student In Africa (B. U. S. I. A.).

Few of us, including yours truly, knew the exploits of Dr. Bawumia when he was the Deputy Governor of the Bank of Ghana. As far as his knowledge in economics is concerned, one is at a loss as to how to describe him – an economics wizard and/or economics whiz-kid? If Dr. Bawumia had been created a bird, he would have been a vulture because it is a bird of patience. It will never eat a carcass until it makes sure the animal or bird is actually dead and no more breathing. The vulture can perch on a tree for so many months, waiting for the animal to finally die before it flies down to devour it.

For two years, Dr. Bawumia kept silent while low-cost so-called economists bastardized all his economics theories and treated him as if he knew nothing about economics. He never bothered to mind people like Ato Forson because as far as economics is concerned, the difference between Ato Forson and Dr. Bawumia in terms of distance is like from Ghana to China. All along, the man who is the chairman of the Economic Management Team was working behind the scenes with his team to build a solid foundation for a quantum leap of the economy. The Town Hall Meeting came knocking on our doors and there he stood in his befitting political suit to deliver what turned out to be the best speech so far that the man has ever delivered. The vulture in him came out because he knew the animal had died and so it was time for him to devour it.

A name can speak volumes but until you have a “household” name, you might do well to tell people who you are and what you have done. In the case of Dr. Bawumia, he has a “household” name that continues to ring in the ears of astute politicians and statesmen. His father, the late Alhaji Bawumia, was one of the finest politicians in Ghana, and if my memory serves me correctly, he was once upon a time the Chairman of the Council of State during Rawlings' era. Dr. Bawumia is not proud because with such a family background, he could have easily adopted the toot-your-own-horn theory. I must admit that a lot of people might have been richer than Aristotle Onassis, but when people heard the name Onassis, they knew who he was.

Of all the government officials in this land of our birth, only the name Bawumia tickles the conscience of the NDC apparatchiks. They simply hate and fear to hear the name because anytime he sneezes, they catch cold. Everybody was surprised when Candidate Nana Akufo-Addo chose him as his running mate in 2008 and maintained him till the NPP won power. In fact, we did not know him to be a politician like his boss, President Akufo-Addo, who has been at the thick of events in Ghanaian politics throughout his adult life but when he entered the ring, the dynamics changed. No wonder the sages say “once you have learnt to walk, why would you want to go back to crawling around”?

In an attempt to bastardize the Town Hall Meeting by the NPP, some peeved NDC members assembled what they thought were their best brains to counter whatever the fine economists said during the meeting. Their so-called fine brains ended up disgracing themselves badly. That is why they say empty pockets don't hold anyone back and that only empty heads and empty hearts can do that.

Recently, one of the ardent readers of this column asked me about my greatest fear when I wrote about my experience when working with the 'Nigerian Concord' newspaper and the gruesome murder of my editor – Dele Giwa. He said he had been reading this column and sometimes he feared for my life. I told him I did not have any fear. He was surprised but that is how I see it. If you label something as 'fear', then it creates fear when sometimes it not a fear but a concern. The NDC members are not doing themselves any good when they continue to fear Dr. Bawumia.

Dr. Bawumia has never replied the NDC anytime it holds a press conference, because he has no fear. If the NDC tries to throw dust into the eyes of the good people of Ghana, he shows concern and replies it at the appropriate time to set the records straight and shame them, which sometimes send them reeling and yelling like a wounded lion.

I listened to Albert Adongo when he tried desperately to reply Dr. Bawumia and I nearly wet my pants. His response was like a tale told by a fool – it was absolutely meaningless! All this while, Mr. Mahama was sitting on his seat at the front roll, giggling and clapping his hands as though Adongo was doing a good job. Akai!!!

The Day The President Visited My New Region

Of all the promises made by the President during the 2016 electioneering campaign, the one that I doubted he could fulfill was the creation of six new regions. I doubted how he could do it without creating troubles and therefore making the nation ungovernable. I was born too late to witness the plebiscite which created the Volta Region. I only read it in history books that the place was called Trans-Volta Togoland before the plebiscite. As students, we used to call the Volta Region as Number Nine and the people there as Number Nine people. The reason was that it became the ninth region after the plebiscite. In fact, our classmates from the Volta Region did not take the Number Nine tag lightly and sometimes we engaged in fisticuffs and insults.

As we trudged on, Mr. Rawlings too launched his coup and because the Constitution was suspended, he unilaterally divided the Upper Region into two, thereby creating Upper West and Upper East regions. After all, there was no Parliament to prove or disapprove the creation of any new region. Barely two years in office, President Akufo-Addo started receiving petitions from the chiefs of the yet-to-be created new regions. After all, was he not the one who promised them that he would create six new regions when he got the nod? The matter went to the Council of State who together with the President approved the creation of the new regions. A commission was set up to seek the views of the chiefs and people of the six yet-to-be created regions, and the result was that the chiefs and people needed the new regions.

The matter fell on the laps of the EC who organized a referendum and greater majority of the people living in those regions voted YES. Parliament too played their roles and today six regions have been added to the existing ten.

This week, the President, Nana Addo Dankwa Akufo-Addo, visited my new region and the joy and happiness exhibited by the people was like the way the people of Jerusalem received the Lord Jesus Christ when he entered the town. He promised to fix the bad roads, cut the sod for the beginning of work on a Ministerial Block, Army Barracks and many more projects. He also donated eight vehicles for the Regional Co-Coordinating Council.

The most interesting scenario on that day was that both NPP and NDC supporters joined in the celebration. Chiefs and queenmothers eulogized and sang the praises of the President. Even before the President came, aspirants of regional position by all political parties started with posters of aspirants literally covering the nooks and crannies of the new region. From all indications, the battle would be hotter and children may not get their supper. That is the beauty of democracy!