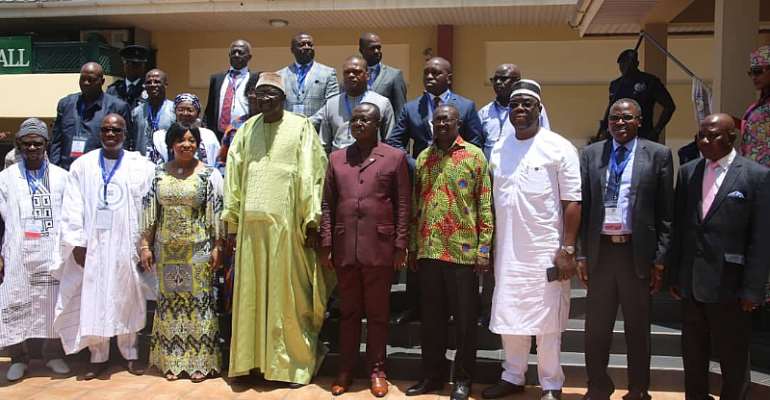 The fourth Legislature localised meeting of the Economic Community of West African States (ECOWAS) Parliament’s joint committee on Administration, Finance, Budget Control and Audits/ Economic policies, Private Sector and NEPAD/ Trade, Customs and Free Movement is currently underway in Accra with a call on Member States to harness the numerous funding potential of the private sector through Public, Private Partnership.

The five days event spanning April 16- 20th, 2019 which is on the theme, “Public-Private Partnership: An Alternative Source of Funding for Community Programmes and Projects” is expected to discuss other innovative means of funding the myriad infrastructure needs of member states activities.

First Deputy Speaker of Ghana’s Parliament, Joseph Osei - Owusu who performed the official opening on behalf of the Speaker described the forum as ‘an excellent example of ECOWAS putting its aims and objectives into practice and creating opportunity to have strategic discussion seeking to empower government and society to deal with our future challenges’.

The meeting in Accra he said has come at an opportune time when Ghana is battling with issues of infrastructure deficit, debt sustainability, revenue generation capacity, fiscal discipline and alternative source of funding of government projects are topical on public discourse.

He reminded the gathering to be mindful of 2063 Agenda which highlighted the aspirations of the African Union.

Mr Osei-Owusu observed that most African States are unable to raise enough funds to embark on development projects leading to infrastructure gaps and have rather resorted to debt financing resulting in fiscal deficit with no new options to finance their expenses.

He noted that they are unable to achieve their developmental needs due to low budgetary levels.

He urged participants to take cognisance of the broader African agenda in their discussions over the five day period.

The Bekwai Member of Parliament also noted with concern member states inability to structurally transform their economies for the creation of jobs for unemployed young people and further degenerated by the inability to grow and develop trade within the community.

He stated that the cost of intra-regional trade between ECOWAS member states is three times more than shipping to external regions due to poor infrastructure.

The First Deputy Speaker indicated the provision of essential service delivery and infrastructure will therefore help to address the infrastructure transformation of economies of ECOWAS members, improve their competitiveness, facilitate both domestic and external trade whiles enhancing integration into the global economy.

According to him, there are enough resources in the hands, pockets and bank accounts of private sector players in members states that if tactically harnessed can help deliver most public infrastructure needs of the continental body.

In the midst of limited fiscal space, Mr Osei-Owusu call for the urgent need to leverage public resources with private resources and expertise to help close the infrastructure gap to deliver the essential needs since these will free up government resources to take care of other needs and reduce the debts stocks which has negative repercussions for the economy.

The lawmaker emphasised the need for a legal an institutional framework to ensure the attainment of the PPP goals.

Ghana, he said, has instituted some of these reforms including the Infrastructure Investment Fund law, policy for PPP and a guideline for harnessing a public resource and a draft Public Private Partnership (PPP) Bill aimed at maximising gains from the private sector to meet the country’s development goals.

He encouraged the joint committee to identify and make use of Ghana's draft PPP Bill for the entire benefit of the sub-region.

Speaker of the ECOWAS, Mustapha Cisse Lo noted that the delocalise meetings are part of the integral activities of the ECOWAS Parliament where critical issues are discussed.

He disclosed that the realization of the common ECOWAS currency has not been finalised due to some challenges in some member countries.

According to him the theme for the meeting is aimed at ensuring that appropriate laws are adapted to ensuring that the various countries sources of funding infrastructure needs are known.

PPP he said is critical because it will help meet the growing social and infrastructure needs in member countries.

The meeting, he said will enable members better appreciate the essence of PPP and how it will help meet the needs of all member states.

Ghana’s Minister of Foreign Affairs and Regional Integration, Shirley Ayorkor Botchwey on her part commended the choice of theme which she said aligns with the vision of the current government to encourage more PPP as a credible source of alternative funding for the socio-economic development of the country.

The Ghanaian government, she said is committed to providing a congenial atmosphere for the private sector to thrive in order to guarantee prosperity.

Miss Botchwey appealed to all ECOWAS member states to galvanise support for Ghana's bid to host the Secretariat of the African Continental Free Trade Area (AfCFTA) in Accra.

According to her, Ghana’s significant history and credentials on Pan-Africanism and continuous commitment to the ideals and values of AU makes her a worthy choice to host the Secretariat.

Head of the Ghanaian delegation, Kwasi Ameyaw-Kyeremeh in a welcome address said public sector partnership of the private sector is a must if nations have to develop.

He acknowledged the commitment of ECOWAS towards the realization of road transport infrastructure project to link member states it is incumbent on member States to look for alternative ways of funding the financial gaps in providing critical infrastructure needs.

Mr Ameyaw-Kyeremeh who is the Member for Sunyani East expressed the hope that the meeting will provide new impetus on critical means of realising infrastructure needs of the sub-region.