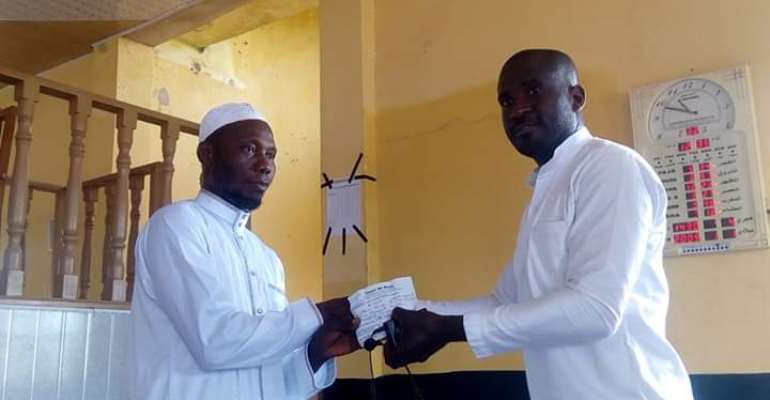 The opposition National Democratic Congress Parliamentary Hopeful of Evalue-Ajomoro Gwira Constituency in the Western Region, Hon. Kofi Arko Nokoe has donated 50 bags of cement worth GHC1,800 to aid in the construction of a classroom block for the Axim Alhus-Sunnah Islamic Basic School.

The donation of the cement was an outcome of the Philanthropist's visit to the school to acquaint himself with the problem facing the school.

The Axim Ahlus-Sunnah Islamic Basic was established by the Islamic community in the area in 1988 and since it establishment successive governments have failed to develop the school.

The primary school consists of a six-unit classroom block but the class two structure is in a very deplorable state because they used bamboo sticks to put up this structure due to lack of funds and it is serving as a death trap.

The construction which is expected to be completed before third term begins when finish will replace the old bamboo-made stage two classroom.

Speaking at a short colourful ceremony organized by the Muslims, Hon. Arko Nokoe said he visited the School three months ago and saw the deplorable state of the structure and was touched by the situation to help.

"Three Months ago I visited the School and at that time it was very downpour and I saw the class two structure in a very deplorable state and the pupils couldn't learn well because what they used to build this classroom were bamboos and I became worried and quickly I was touched by the situation to help build a new structure for the class two pupils", he explained.

He believed that after the completion of the structure it will provide a conducive environment for the pupils to be able to study well and improve their academic performance.

Hon. Arko Nokoe who was the President of Axim Youth Association (AYA) revealed that education is one of his topmost priorities and pledged to help the Muslim community to complete the structure before third term begins.

He, therefore, expressed worries about the falling standards of education in the Municipality and disclosed that currently the Nzema East Municipal Assembly is last on the B.E.C.E League Table in the Western Region.

He said as a result of the situation he has embarked on educational programs to improve the performance of the Municipality.

"Because I want the education of my Municipality to improve better, I have established a vacation class program for all school children to improve their learning abilities", he said.

He added that "Every vacation I organize a Motivational Party for all the school children at Axim and as a result, I give award to best school children from primary school to JHS to motivate them to learn hard".

He highlighted the following achievements when he was the President of Axim Youth Association (AYA); organization of extra classes, payment of school fees, distribution of school bags, distribution of shoes to school children, donation of 250 bicycles to some deprived students and teachers, revonation of some school buildings among others.

He, therefore, seized the opportunity to thank his development partner, Development Management Students (MSC) of KNUST for supporting him to raise the money to provide the 50 bags of the cement to the Axim Allasuna Islamic Basic School.

He also pledged to support the Municipality to improve well in education if the need arises.

On his part, the Nzema East Municipal Chief Imam, Alhaji Abdul Mumuni thanked the NDC's Parliamentary Hopeful and his MSC at KNUST for the kind gesture and seized the opportunity to pray for them to live long and reclaimed what they have lost in abundance.

The Chief Imam, pledged to support in the construction of the structure and said the donation has come at the right time.

He revealed that they have made several appeals to successive governments to help them to build a new classroom block for the class two pupils but were not materialized.

The President of Axim Youth Association (AYA), Solomon Elvis Eshun expressed his profound gratitude to the NDC's Parliamentary Hopeful for thinking about the educational development of the area.

He disclosed that the NDC's Parliamentary Hopeful did extremely well when he was the President of Axim Youth Association.

He, therefore, used the opportunity to appeal to other benevolent organizations to support the educational standard of the Municipality to improve.

He promised to liaise with the NDC's Parliamentary Hopeful to do more for the development of the area.

He promised to continue the good works the NDC's Parliamentary Hopeful started when he was the President of Axim Youth Association (AYA) and appealed to him to also support him.