Notre-Dame Restoration A Chance For Engineers To Get Clever 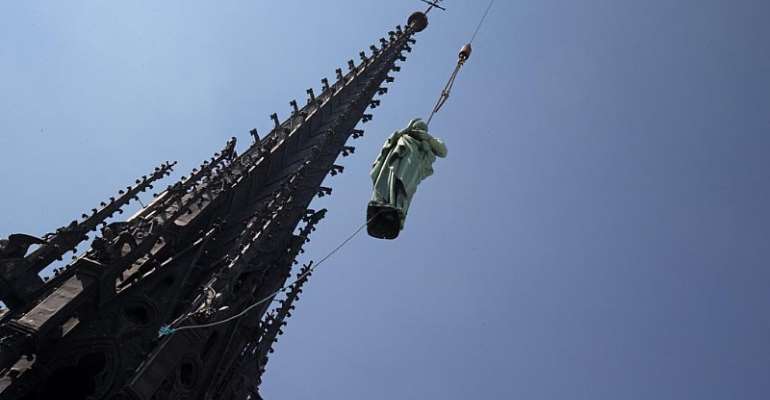 There's hope in the ashes of Notre-Dame cathedral with talk of the tragedy offering engineers a chance to find innovative new solutions to recreating Gothic architecture – safe in the knowledge the worst has been avoided.

While images of Notre-Dame's crumbling spire stirred widespread grief, the heartbreak has been somewhat tempered by the fact the iconic steeple was a 19th-century Gothic imitation – as were many of the cathedral's famed gargoyles.

“The spire was built in the 1860s by an architect (Eugène-Emmanuel Viollet-le-Duc) who completely reshaped cathedrals at the time and replaced most of their statues,” explains Paris-based arts writer Vincent Noce – who says that up close they're not as good as the “exquisite medieval statues” which were there before and which today live in the Louvre and Cluny museums.

News that many of the cathedral's historic treasures were saved – including the structure itself – has been met with relief, with the extent of the damage to the stained-glass windows still not yet fully understood.

“When you have a fire in a museum or an art gallery, it's not the fire that causes the most damage but the water that's used to put it out,” says Noce. “We don't know how much art has been damaged by water.”

French companies and wealthy patrons pledged donations of hundreds of millions of euros as President Emmanuel Macron announced the launch of a national fundraising campaign.

An opportunity for innovation

Much of the conversation is already being directed at how to rebuild. The skills needed for this sort of job are to be found in the ranks of the Compagnons du Devoir et du Tour de France – an organisation of craftspeople and artisans that dates back to the Middle Ages.

“There are always important restorations to be done in historical buildings and there is no question we have the talent necessary to rebuild Notre Dame,” says French art historian Amélie Sabatiern. “The 'compagnons' are especially trained for this.”

The question concerns the best way to go about rebuilding. “Do we do the reframing in wood or not? That was logical in the 13th century, but now we are able to make this with iron,” Sabatiern adds.

“When Reims Cathedral was rebuilt after being bombed during WWI, the framing structure was made from concrete – and this was the first time this was done. Cathedrals now, just like in the 13th century, offer engineers a chance to experiment and to find new solutions, so they are not just imitations.”

About a thousand workers spent their lives erecting Notre Dame on Ile de la Cite – in the heart of Paris – between the years of 1163 and 1345. Since then the site has become a fabled part of French history. It's where Napoleon was crowned, where the liberation of Paris in 1944 was celebrated and the scene of Victor Hugo's famous novel.

It's also been the victim of continued damage over time – partly because, historically, the Gothic period “was not very fashionable,” explains Sabatiern, who adds that in the 18th century the stained glass was removed to allow more light into the cathedral.

While people mourn the loss of the Gothic frame that held up Notre Dame's roof, it was never something you could visit, so most people were unaware of it, says Sabatiern.

Soldiers will die more in any order to shoot to kill galamse...
17 minutes ago

We see politicians flaunting cars, houses in less than four ...
38 minutes ago