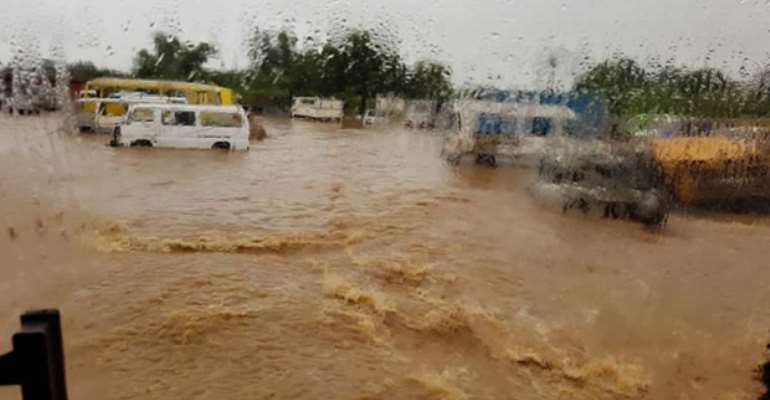 Rains no longer bring joy as they used to do to the residents of Accra. For those lucky to be living on high grounds, they cannot count themselves lucky. They could be trapped by floods in some parts of the city or threatened by strong currents on some weak bridges as they try to manouvre through. The rains no longer create the congenial environments for us to sleep soundly especially after the curtains have been drawn over the elapsing dry and sweltering hot season to usher in another season of downpours.

That is the reality which has dawned upon us. In some instances, some of the factors are attributable to our negative human activities. We have hammered upon this for the umpteenth time and still counting.

When the first major downpour of the year, on a Sunday, occurred, it claimed five lives or so. Following this, the Ghana Meteorological Services Agency (GMSA) told us that more are yet to come.

While some heard the weather experts, others, most of us, did not and even sneer at them wryly. Now, it is turning out that the GMSA must be listened to.

In countries on the other hemisphere, forecasts are taken seriously. Indeed, in the aviation industry, such disclosures are followed religiously by pilots who relate same to passengers in the cabins; the forecasts are considered critical factors prior to takeoff and landing of aircraft.

Ghanaians should start reading forecasts and let these details inform their movements. Death would come when it will but in some instances human beings can avoid certain occurrences by keeping safe through credible information.

Under the circumstances, we find ourselves today when it appears that with every downpour lives are lost; we should help ourselves by staying indoors when the skies are pregnant with rain. As motorists, when the weather changes sometimes abruptly signaling a downpour, the best thing to do is find high ground and park until the downpour is over.

The Greater Accra Regional Coordinator of the National Disaster Management Organisation (NADMO), Archibald Cobbinah, yesterday asked residents of Accra to avoid underestimating the power of running rainwater by trying to drive through places associated with strong currents when there is a deluge.

Motorists, who underestimated the power of floods and sought to drive through bridges whose integrity is questionable, have drowned.

We are saddened by the death of the two soldiers and others in last Sunday's downpour – the second in less than a fortnight story which is our lead story today. The thought of deaths lurking around flood-prone areas and others outside them during the season comes with a sense of foreboding for the residents of Accra.

The rains are here. Perhaps it is too late for anything to do be done about obviating the floods. When last year's occurred, we heard so much about measures to obviate future recurrences. Now that it is beginning to appear that deaths are now features of the rainy season especially in Accra, we wonder whether indeed the city authorities are prepared for the rains as they promised.