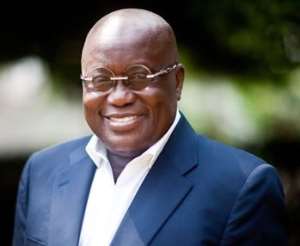 The Germany branch of NPP is elated to see the progress Ghana is chalking since the assumption of H.E. Nana Addo Danquah Akufo-Addo and Dr. Mahamadu Bawumia to the office of presidency under an NPP government.

We all recall that in the lead up to the 2016 elections, NPP promised to put Ghana on the path of prosperity and progress through many initiatives amongst which are: FSHS, 1V1D,1D1F, 1C$1million, etc. The then government and now opposition, NDC, mounted a spirited fight to underscore the impossibility of achieving these promises.

Time has appeared to be vindicating Nana Addo and the NPP government too quickly than expected. Almost all the promises made and listed above, are near 100% achievement to the eternal embarrassment of the NDC and its presidential candidate, H.E. John Dramani Mahama just within 3years in office and to the admiration/commendation of all right-thinking Ghanaians.

Just this week, we've seen a monumental initiative of the government targeted at boosting the country's infrastructure development under the Sinohydro deal. It must not be lost on Ghanaians how the NDC bastardized the Sinohydro deal and proceeded to 'internationalize' their incompetence by writing to the IMF to seek a declaration that'll undermine the deal but they failed.

After failing to secure the consent of IMF to perpetuate their diabolic intentions, and they (NDC) having been confronted with the reality of the projects under the impressive deal, the NDC this week launched a crusade of discrediting the projects. They started by lying about lack of value-for-money audit and when one was shown to them, expectedly, they through Kwame Agbodja, questioned the competence of the Ghana Institute of Surveyors/Engineers to undertake such an audit. Again they sought to change a long-standing parliamentary procedure which didn't make an audit a 'condition precedence' for approval of projects - all aimed at discrediting the projects and impugn wrongdoing on the part of government but they were once more, brutally bruised by the Information Minister, Kojo Oppong Nkrumah. NDC needs to undergo reformation as their wobbly attempts always crush in on them.

We're particularly happy about the even distribution of projects under the deal across the country with Tamale receiving for the first time in Ghanaian history, an interchange. The much decried Sefwi-Akontombra road is to be constructed. Accra and Kumasi inner-city roads will receive facelift. We'll not want to bore Ghanaians with the many other projects that have been commissioned this week since everyone is a witness to them. Indeed the president has declared 2019 as an infrastructure year. These projects undoubtedly, will additionally, throw up jobs for grabs by Ghanaians. It's estimated that over 6000 jobs would be created as a result.

We'd like to ask Ghanaians to give their massive support to the president as he works around the clock to put Ghana on the trajectory of progress. Contractors must deliver on time and must bring to bear the highest level of professional competence so that the projects don't deteriorate within a short time after their completion as we've seen in the past. Project consultants should be meticulous and strict to ensure compliance with the necessary project standards.

We hope to see many more projects that will ultimately, deliver to Ghana, our developmental aspirations.

You can sign it with my name or your name, ie,