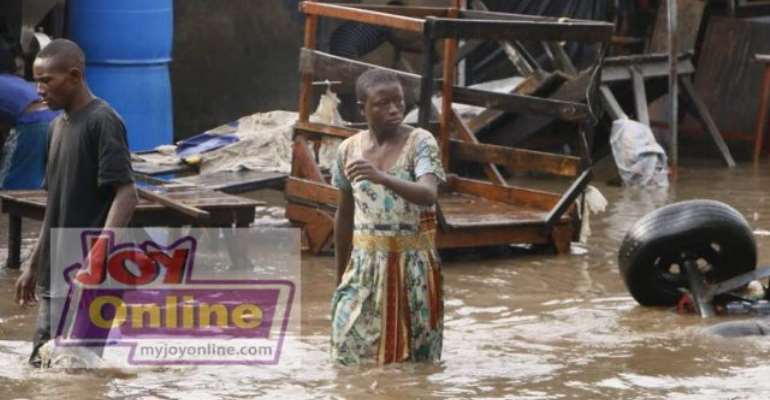 The Meteorological Agency has predicted thunderstorms and heavy rains this rainy season – from March to November in the south of Ghana.

Head of Forecast at the Agency, Joseph Portuphy, has said Ghanaians should brace themselves for more rainfall in the middle belt and coastal areas.

Floods in the capital especially and other parts of the country have claimed lives this month.

A total of seven bodies were retrieved from flood waters at different parts of the capital following heavy rains on Sunday, April 14, 2019

The National Disaster Management Organisation (NADMO) said four of the seven bodies were recovered from flood waters at Adjei-Kojo, a suburb of Accra.

The bodies of a husband and wife – both military officers – were among the seven retrieved from flood waters by NADMO after the Sunday rains.

S/Sgt Arthur Jabez, 45 and his wife WO Sarah Kuadzi, 40 were travelling in a military pick up from a funeral in Tema when their vehicle got caught in the flood waters at a suburb along the motorway known as Adjei-Kojo.

These deaths bring to 12, the total number of lives lost as a result of floods in Accra in just a week.

NADMO is still searching for the bodies of a six-year-old boy and an adult male who were swept away by flood waters at Sakaman and Ablekuma, respectively. The bodies of man who was pushed into the Odaw River around the Kwame Nkrumah Interchange and that of the 11-month old baby is also being searched for.

Meanwhile, government said it has allocated ¢197 million for the desilting choked drains and other drainage works in the country.

Addressing the press in a joint interaction between her Ministry and the Greater Accra Metropolitan Water and Sanitation Projects, Cecelia Dapaah said the contract for the works has already been awarded by the Ministry of Works and Housing.

Watch more of Mr Wise Ametepe submissions and advice to the government and Accra residents about the rains in the video below.