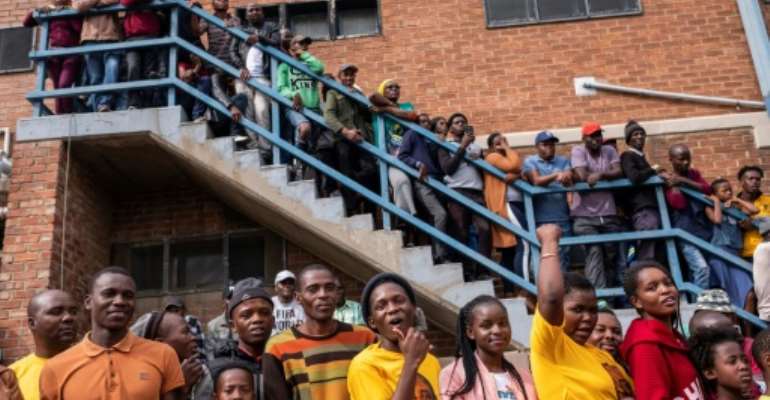 The African National Congress holds 249 or 62 percent of the 400 seats in the national parliament, its lowest showing in five successive elections. By WIKUS DE WET (AFP/File)

"In 1994 we voted for Nelson Mandela, then for Thabo Mbeki, then again for Jacob Zuma. But nothing has changed," sighed Aubrey Kutlawano after attending an election rally by South African President Cyril Ramaphosa.

Aged 42, Kutlawano has no job and lives in a single room with three other people, including his disabled sister.

"They are just greedy people working for themselves," he declares of the African National Congress (ANC).

After decades fighting apartheid and its entrenched discrimination, the ANC came to power 25 years ago promising "A better life for all" -- housing, services, education and jobs for black people denied equal opportunities under decades of apartheid.

Around him, the stadium in Johannesburg's Alexandra township emptied swiftly. Ramaphosa's closing words had barely died down before he was hustled to a limousine by bodyguards.

Near the barriers erected between potential voters and the political class, kids jostled to grab a T-shirt in the black, yellow and green colours of the ANC.

For weeks, Ramaphosa has attended rallies to persuade an electorate of 27 million to back the ANC once more in May 8 general elections.

The party holds 249 or 62 percent of the 400 seats in the national parliament, its poorest showing in five successive elections. At its height in 2004, the ANC got nearly 70 percent of the vote.

Polls suggest it will dip to an unprecedented low of 61 percent in parliamentary vote -- still far ahead of its nearest competitor, the opposition Democratic Alliance (DA) which holds less than a quarter of the seats.

The ANC is embroiled in numerous corruption scandals, with high-profile figures accused of lining their pockets even as millions of ordinary citizens battle to make ends meet. 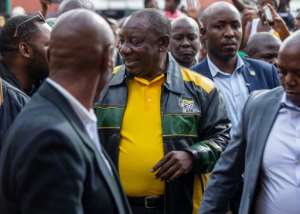 Official unemployment is over 27 percent.

But on the campaign trail, Ramaphosa -- a trade union leader-turned multi-millionaire -- sometimes appeared out of touch with the daily struggle of the masses.

Ramaphosa expressed "shock" at the state of electricity provision in a country where people have had to find ways of living around regular power cuts.

In Alexandra, people are angry.

The DA runs their municipality, part of Johannesburg, but it is the ANC -- which governs the larger Gauteng province -- they blame.

Overlooked by the glass and steel towers of the upmarket Sandton business and shopping district -- considered Africa's richest square mile -- the township bears witness to the failings of government.

Sewers and waste dumps lie open, roads are potholed, and makeshift homes with corrugated iron walls and roofs are crowded.

Most of the 200,000 residents subsist without electricity, running water, or an income.

'The devil you know'

"Everybody is complaining about Alex being a high-crime place, that's only because people don't have jobs," said resident Kgomotso Mosepidi.

"People are forced to steal to make a living," added the father of eight, who has a diploma in information technology but has been unemployed for five years. 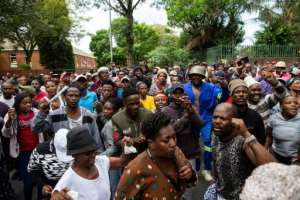 "The state is doing nothing for us, they are just coming to get our votes and then they disappear for five years," said Nana Zweni, a 44-year-old, unemployed mother of four.

But despite their anger, people still plan to vote for the ANC.

The DA has battled to carve away at the loyal ANC voting base, and polls show it dipping from about 22 to 18 percent in May.

The radical Economic Freedom Fighters, whose leader split from the ANC and promises to seize land from whites, is polled to rise slightly from six to 10 percent of the vote, still far from a power challenge.

"It's the liberation movement, they set us free. And Cyril is a face of hope. Better the devil you know...," summarised Zweni.

Before Alexandra, Ramaphosa had travelled about 300 kilometres (185 miles) south to Thabong township in the mining town of Welkom, where he promised new houses, laptop computers and "a better life" overall. 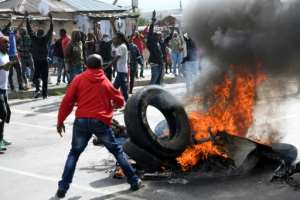 "We must respond to the pain and the suffering of our people here," he told the rally, punctuating his speech with shouts of "Amandla" ("Power") as in the time of revolutionary struggle.

Those present had familiar concerns.

"Since we are in a democracy, nothing has really changed. We're still living here in (an) informal settlement, struggling to get basic services," said Tau Mphasa, 54.

Yet, hope remains. "I think Cyril is the one. But it's their last chance. If he doesn't deliver, next time I will go elsewhere."

"I'm going to vote for ANC again because I trust him. But I'm crying every day."