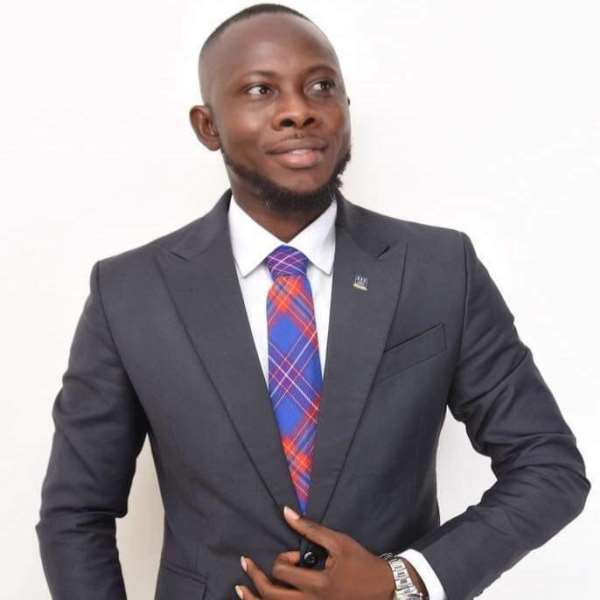 A member of the NDC communication team in the Savanna Region, Seidu Kudus Gbeadese has described the Ashanti regional chairman of the NPP Mr Bernard Antwi Bosiako popularly known as Chairman Wontumi as a rebranded Southerner who is full of hatred and jealous about John Dramani Mahama.

Responding to comments made by chairman Wontumi describing the late father of former President John Dramani Mahama, Mr Emmanuel Adama Mahama as a corrupt thief in a long wedded letter, Mr Kudus catalogued the various achievements of the late E.A Mahama and took time to raise responsible children who are of much importance to Ghana today.

Below is what Kudus Gbeadese Issifu wrote to Chairman Wontumi 👇🏻👇🏻👇🏻👇🏻

MY LOVE LETTER TO CHAIRMAN WUNTUMI

Greetings from an innocent Lad from Laribanga to Mr Wuntumi of modern day politics of Ghana. I have taken the pain to write to you this hymn as one of the kinsmen of John Dramani Mahama. I would have opted not to do this if your vituperations were gathered around a spirit of positive criticisms of the Mahama regime from 2013-2016 which of course would have been intended to shape our public discourse going forward. But as I surf through the web with the search engine “Wuntumi on Mahama” all the headlines and their content on the tabloids are one way; personal but naked attacks on Mahama, his immediate and distant family and the last one was targeted at his kinsmen if I got your intentions right.

Chairman, I read from the tabloids your latest attack on the Father of Mr John Dramani Mahama, Mr Emmanuel Adama Mahama in which you refer to the latter as a “Corrupt thief”. I was shocked at the sight of this headline and after reading its content, I decided to release myself from the shackles of anger because I felt you were just, as usual, showcasing your hatred and jealousy at the Mahama’s. But I decided to write this love letter to you just so you would have a feel of what a kinsman feels not because I think you are my coequal when it comes to reasoning and enlightenment( I am sure several steps ahead of you sir). The fact that I, Issifu Seidu Kudus Gbeadese has passed through tertiary education successfully should put me in a position not to write such a letter to an EMPTY SHELL who can’t make meaning out of Proverbs, but I am doing so now for very strange reasons.

In the first place, Mr Mahama has a father who he’s proud of and has taken after. Mr E.A Mahama who was the first MP for West Gonja Constituency was also appointed as the first Minister for Northern Ghana (Region). His name became a household name in Northern Ghana as he was one of the first political stars to have groomed and brought several people including the father of the current Vice President, Dr Mahmoud Bawumia to the political limelight. The Mahama brand picked its roots from this selfless man who served his people with foresight.

But as a responsible father Mr. E. A Mahama had an amorphous responsibility of executing national assignments as an MP and a minister of state at the same time raising responsible but smart children who were trained to explore their potentials just like any other kid. The results are the Entrepreneurship in Ibrahim Mahama, Alfred Mahama, Peter Mahama, Michael Mahama etc. And the very footprints Mr E. A Mahama left were what H.E John Dramani Mahama stepped into and decided to double up against the passing time. What else will make a father in grave happy if not his successful offsprings who on daily basis bring back the good image of their father and his name mentioned for good reasons?

Was E. A Mahama a “thief?” Could he ever be one? Well...a Gonja Royal from a typical traditional home could never even steal from the Mother’s pot. Before, during and after his service to this nation, there hasn’t been a time where a single allegation of theft or corruption being brought against him or even stand trial or execution for any wrongdoing. So where is that stooge of a chairman getting his feed from? If satisfying President Nana Addo and the NPP is to find an easy way to attack Mahama, his immediate family, and his overall kinsmen, then we should be asking questions about who Wuntumi is, who is/was his father, who Nana Addo himself?

Mr Wuntumi, the Empty, did you say Mahama is selfish and self-seeking? Well, I know you don’t even understand the connotations of these two, so I blame you not but the media outlets which mostly give embellishments to your emptiness in order to make you look threatened but hollow. A self-seeking/selfish President would not see Kumasi, the birthplace of NPP and still go ahead to engage in the biggest ever investment in the entire Ashanti Region which is the Kejetia Market Project. A self-seeking/selfish President would not look at the faces of his people in Damongo and then give water to Nana Addo and his Kyebi residents. A self-seeking/selfish President would not see the hospital in Salaga and then decided to invest millions of dollars in the Ridge Hospital Project, University of Ghana Hospital Project, Ashanti Regional Military Hospital Project and the likes.

I want to beg some questions; who is Wuntumi’s father? Who is Wuntumi himself? What does he do apart from galamsey and contract killings? What does he do apart from raising and feeding parallel forces to stand against the power of the state? We all are aware that the Delta Forces who beat up the judge and disrupted the court proceedings were raised, trained and unleashed by Empty, blockheaded Wuntumi. Is that the kind of person who should have the space and guts to insult the father of HE John Dramani Mahama and his kinsmen?

Mr Empty Wuntumi, if you think your target is to get to where Mr Ibrahim Mahama is with all the filth on your fingers, then, rethink your approach. Mr Ibrahim Mahama toiled through thick and thin to get to where he is today which is why he’s growing from roots to leaves irrespective of which party forms a particular regime. HE John Dramani Mahama toiled from an ordinary MP through Deputy Minister to a President. Mr Alfred Mahama is into his genuine business just as Mr Peter and the other Mahama brothers.

Only last two months, we woke up to yet another explosive expose’ by Anas Aremeyaw Anas. In this expose’ was a man at the Presidency, Mr Charles Bissue who was seen collecting bribe in order to pave way for the likes of Wuntumi to engage in his bloody business (galamsey). That is the corruption and thievery we are experiencing today under Nana Addo’s watch with Wuntumi and his cabal being the ultimate beneficiaries.

Wuntumi is threatened by Mahama’s come back because his bloody business stands to collapse hence his incessant attacks on the latter. Imagine the following headlines:

1. Wuntumi Challenges Mahama’s 3rd term bid in the Supreme Court-graphic online...10th December 2018. This one got my bones boiling from the marrow. What does this blockhead knows about the law? But because he’s such a stooge who has allowed his body and soul to be used as a stage-post for the execution of such wicked agenda, the headline was so attributed to him.

2. Mahama is plotting to kill me-Wuntumi...Daily guide network, 28th January 2019. So Mahama as the Chairman of the Police Council from 2009 to 2012 and Commander in Chief of the Ghana Armed Forces from 2012 to 2016, couldn’t use these powers to kill a nitwit like Wuntumi but only wait after exiting as a President before making such an attempt?

But this is what happens to a dying government which enjoys the frenzy of attacks on the person of Mahama other than solving the problem of a self-created dumsor....Or using the over GHC 50bn borrowed cash to engage in strategic capital investments which will trigger a non-oil growth and ultimately throwing up sustainable indigenous jobs...Or sitting back and fixing the self-inflicted insecurity in the country which has painted the image of Ghana black in the international stage...Or prosecuting the numerous state officials mostly at the seat of government who have engaged in acts of corruption and naked thievery. These are the headaches of Ghana and not the usual propaganda and hate speeches from tribal bigots like Wumtumi who add nothing to our collective growth as Ghanaians.

A very serious nation won’t give attention to people like Wuntumi who can’t even read from a prepared speech. But the Ghanaian media will always try to create a person in such an empty soul of Wuntumi to equate the enviable personality in Mahama. Imagine such a misfit in a balance with Mahama whose name is written in the history of this world as one of the most influential African of Contemporary Politics.

Oops! Lest I forget, is it true that Chairman Wuntumi is a rebranded Southerner who originally is one of our tribesmen from Upper East? Lost but a found soul.