Re: You Are A Corrupt Thief Just Like Your Father-Wontumi Punches Mahama 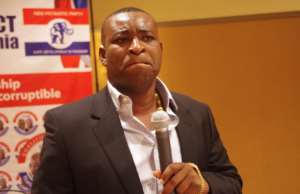 Our attention has been drawn to a story published by Ghanaweb.com and circulating on social media with the above caption. In the said publication, the Ashanti Regional Chairman of the NPP, Bernard Antwi-Bosiako, also known as ''Wuntumi'', speaking on ASH FM, said "President John Mahama is a corrupt thief just like his father, Mr. E.A Mahama, who was an Agric Minister in Nkrumah's administration''.

Ordinarily, this should be discounted as one of the many doltish and unintelligent effusions of a dimwitted fellow who is reputed for reckless talk. However, for some time now, it has been the strategy of the failing Akufo-Addo government to hide behind shady characters like Wuntomi to run down and soil the enviable reputation of former President John Dramani Mahama, a reputation, we must jealously guard.

One of the many pedestrian lies peddled by Wontumi on that platform was his claim that the late father of the Former President, Mr. Emmanuel Adama Mahama was a Minister of Agric in the Nkrumah regime. For the records, these are the four key personalities who served as Ministers of Agriculture under the Nkrumah regime:

At no point did Mr. Emmanuel Adama Mahama, father of the Former President, serve as Agric Minister of the Republic of Ghana as is being alleged by Wuntomi. So for this basic historical fact to be lost on a whole Regional Chairman of the NPP speaks volumes of the misinformed character we are talking about here.

In fact, Mr. Emmanuel Adama Mahama was the first person to be appointed Minister of Northern Ghana under Nkrumah and also served as an advisor to Dr. Hilla Limann, President of the 3rd Republic. At no point in his public life was he even investigated for the slightest form of corruption.

So in the eye of right-thinking Ghanaians, he was a very selfless and incorruptible man who served his nation with distinction and dignity. And the illustrious feat his children(mainly John and Ibrahim Mahama have achieved in life) is a testament of his sterling qualities as a father. If we may ask; who is the father of Wontumi? We dare say that if Wontumi had a father as disciplined as E.A Mahama to guide his upbringing, he would never have turned out as clueless and ill-informed as he is.

Again, we find his allegations of corruption against President Mahama as one of the usual baseless claims often made by operatives of this failing Akufo-Addo government against the impregnable reputation of President Mahama. As a matter of fact, Article 57(6) of the 1992 Constitution gives every succeeding gov't a grace period of 3 years to prosecute a Former Presidents who have engaged in one corrupt act or the other. Therefore, by 7th December 2020, President Mahama will not be legally immune from prosecution for so-called "acts of corruption " that the likes of Wontumi and others incessantly allege. We dare the NPP government to either follow through with the provisions in Article 57(6) or forever remain shut.

Indeed, President Mahama will go down in history as one of the few Presidents in the fourth Republic to have shown a genuine commitment to the fight against corruption whilst in office.

1. The National Anti-corruption Action Plan(NACAP), which still remains Ghana's key blueprint in the fight Against corruption, was introduced.

2. For the first time in the history of Ghana, we had a President who was bold enough to prosecute key members of his own government suspected to have engaged in corruption.

On the contrary, today we have a true defender of corruption as President, one who will go to great lengths to clear his errant appointees of corruption even in the face of compelling evidence to the contrary. Sadly, under the watch of Wontumi's mentor, President Akufo Addo, the Flagstaff House, which is supposed to be a fount of national honour, has been reduced to a citadel of corruption. This we believe should be a source of worry to Wontumi, if he could properly discern good governance.

Again, Wontumi's claim that President Mahama did nothing to alleviate the suffering of the masses during his Presidency is not borne out by the facts. President Mahama's achievements in the Ashanti region alone exposes the fallacy of this claim. For the information of Wontumi:

2. The Kejetia Central Market, the Atonsu, Tafo and Asawase markets constructed by John Mahama provide livelihood and sustenance to over 30,000 Ashanti women.

3. The Mampong and K3 (Konongo, Kumawu, Kwahu) water projects initiated under the Mills/Mahama administration have provided safe and potable drinking water for about 300,000 people in the Sekyere and Asante Akyem enclave of the Ashanti region.

Having won power through lies and deception, the Akufo Addo government is intimidated by the soaring popularity of Former President, and are prepared to employ devious and crude methods of character assassination. We, therefore, urge the public to treat such tantrums as those of Wontumi with the contempt they deserve. It is a sad narrative that today, the politics of Ghana, which has been the envy of other countries, has been cheapened to accommodate charlatans like Wuntomi. However, we wish to assure him that he will no longer have a field day to churn out his trademark reckless lies.