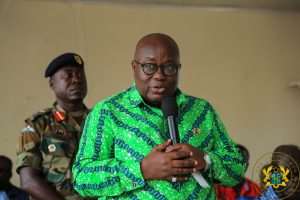 President Akufo-Addo has reiterated his commitment of ensuring that infrastructural projects are equitably distributed across the newly created regions, and not concentrated solely at the regional capitals.

According to President Akufo-Addo, “when I presented the Constitutional Instruments to the heads of delegations of the newly created regions, I indicated that developmental projects will not only be centered at the regional capitals.”

He continued, “There is going to be equitable distribution of regional infrastructure in every region. You, in Atebubu, will also receive your fair share of the infrastructure.”

The President made the remark when he was speaking at an interdenominational church service at Atebubu, in the Bono East Region, on Sunday, 14th April, 2019, when he commenced his 2-day tour of the newly created region.

Addressing the congregation, President Akufo-Addo noted that even though it has taken decades for the Bono East Region to be created, “we believe that God's time is the best, and God ordained it to be that it should be during Akufo-Addo's time, as President,that this region is created”.

Affirming his commitment to strengthening the capabilities of the Bono East Region, and, thereby, quicken its pace of development, the President indicated that the building housing the Regional Co-ordinating Council (RCC) will be sited in Techiman, the capital of Bono East.

“The local government staff required to ensure the smooth operation of Bono East region, such as the Regional Chief Director, Regional Planning Officer, and the Regional Budget Officer, are already in place in Techiman. I will present eight vehicles to the Bono East Regional RCC on Monday, when I arrive at Techiman,” he added.

The President admonished the congregation and residents of Atebubu and the Bono East Region, in its entirety, to support the new regional Minister, Kofi Amoakohene, who will, in turn, work to bring growth and development to the region.