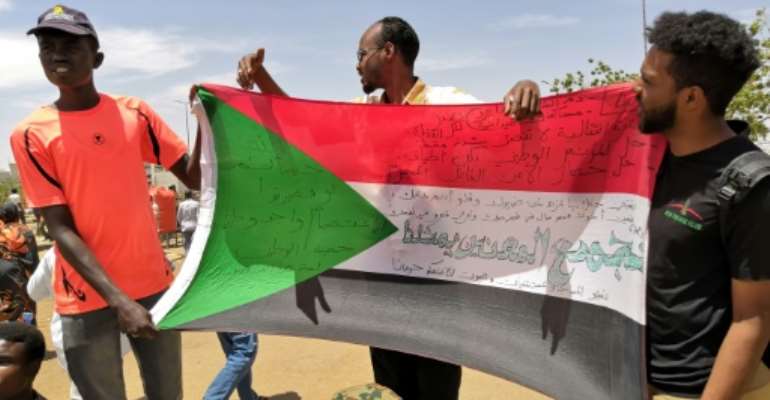 Demonstrators have refused to end their rallies since the ousting of longtime leader Omar al-Bashir, calling for a civilian government to be set up. By ASHRAF SHAZLY (AFP)

Sudanese protesters demanded new military rulers set up a civilian government as the foreign ministry called Sunday for backing from the international community to help the country's "democratic transition".

A 10-member delegation representing the protesters delivered their demands during talks with the council late Saturday, according to a statement by the Alliance for Freedom and Change umbrella group spearheading the rallies.

"We will continue... our sit-in until all our demands are met," including the formation of a fully civilian government, said one of the alliance's leaders, Omar al-Degier.

Later the military council met with political parties and urged them to agree on an "independent figure" to be the country's prime minister, an AFP correspondent present at the meeting said.

"We want to set up a civilian state based on freedom, justice and democracy," a member of the military council Lieutenant General Yasser al-Ata told several political parties, urging them to agree on the figures to sit in civilian government.

The protestors have insisted that civilian representatives must join the military council, and demanded that a fully civilian government be set up to run day-to-day affairs.

Meanwhile,the foreign ministry urged the international community to back the military council "to achieve the Sudanese goal of democratic transition," it said in a statement.

The council chief General Abdel Fattah al-Burhan is "committed to having a complete civilian government and the role of the council will be to maintain the sovereignty of the country", it added.

Talks between protest leaders and Sudan's new rulers were followed Sunday by a meeting between Washington's top envoy to Khartoum, Steven Koutsis, and the military council's deputy.

Mohammad Hamdan Daglo, widely known as Himeidti, told Koutsis "about the measures taken by the military council to preserve the security and stability of the country," the official SUNA news agency reported.

Himeidti is a field commander for the Rapid Support Forces (RSF) counter-insurgency unit, which rights groups have accused of abuses in the war-torn Darfur region.

He also pledged that individuals implicated in killing protesters would face justice and that protesters detained under a state of emergency imposed by Bashir during his final weeks in power would be freed.

Young Sudanese paint a national flag on a wall in the capital Khartoum. By ASHRAF SHAZLY (AFP)

Burhan took the oath of office on Friday after his predecessor General Awad Ibn Ouf stepped down little more than 24 hours after ousting Bashir.

Tens of thousands of people have massed non-stop outside the army headquarters since April 6, initially to urge the military to back their demand that Bashir be removed.

But while celebrating the fall of both men in quick succession, protesters remain cautious.

Rights group Amnesty International on Saturday urged the military council to examine Ghosh's actions during a crackdown against protesters during the final weeks of Bashir's rule.

"It is crucial that Sudan's new authorities investigate Salah Ghosh's role in the killings of scores of Sudanese protesters over the past four months", said Amnesty's regional director Sarah Jackson.

A grab from a broadcast on Sudanese TV shows General Abdel Fattah al-Burhan addressing the nation on Saturday. By - (Sudan TV/AFP)

On Saturday evening, the new military ruler named NISS deputy head Jalaluddin Sheikh to the council, with Himeidti as its deputy head.

"Himeidti was part of the crimes that happened previously, but at least now he is on the side of the people," said Mohamed, a protester outside the army headquarters who gave only his first name for security reasons.

Key regional power-brokers Saudi Arabia and the UAE have voiced backing for the transitional council.

Sudan is part of a UAE and Saudi-led military coalition fighting Iran-backed Huthi rebels in Yemen.