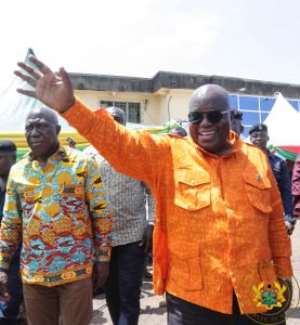 President Akufo-Addo says he will fulfil every promise he made to Ghanaians to put his critics to shame.

President noted that since he took over the administration of the country, his government has initiated a lot of social intervention programmes to reduce the unemployment rate in the country.

The President was addressing a durbar at Duayaw Nkwanta in the Tano North Municipality of the Ahafo Region as part of his four-day tour of the Bono East and Ahafo Regions when he made the remark.

He said the initial support that the new Ahafo Region needs has been given and infrastructure would be spread across the region.

Nana Akufo-Addo noted that on the creation of the new regions, opponents had accused him of deceiving Ghanaians for votes.

He said his opponents were unable to do what they were supposed to do when they were in power and therefore doubted whether the NPP government would be able to fulfill its promises.

“On the creation of the regions, you are all aware my opponents said I was only deceiving Ghanaians to get votes. Have we not created the regions? We said Youth in Afforestation and Planting for Food and Jobs, we have done them. Whatever I promised they said I cannot do it. I always get headaches when I hear people saying this. I am going to fulfil my promises one after the other to shame my critics,” Nana Akufo-Addo noted.

He said much has been done in the area of Planting for Food and Jobs and other initiatives.

“Three Hundred people have been employed under NABCO in the Tano North Constituency, under Planting for Food and Jobs, Youth in Afforestation, Pollination, 2,500 youths have been employed. We are doing this to show Ghanaians that they have not wasted their votes on us,” the President added.

Covid-19: Extension Of Lockdown Will Be Decided – Akufo-Addo
28 minutes ago