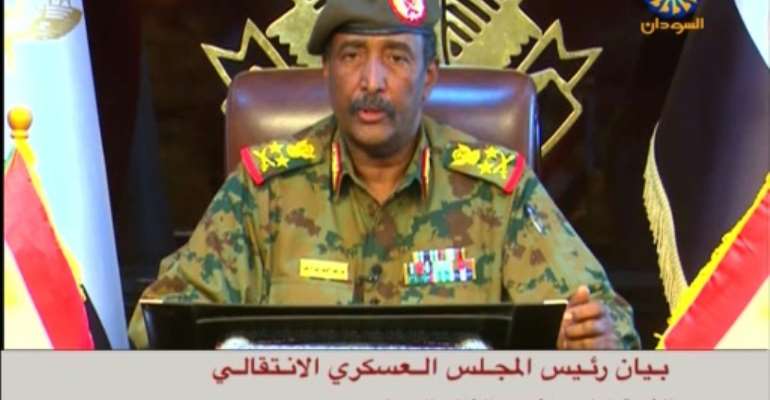 "I announce the restructuring of state institutions according to the law and pledge to fight corruption and uproot the regime and its symbols," General Abdel Fattah al-Burhan said, a day after he was sworn in to head Sudan's new ruling military council.

He also ordered the release of all prisoners jailed by special emergency courts and the immediate lifting of a night-time curfew imposed by the council earlier this week.

Burhan also pledged Saturday that individuals involved in the killing of protesters would face justice.

His initial announcements indicated he wanted to show the tens of thousands of protesters on the streets that he is not part of the regime's old guard and was genuinely committed to reform.

The new leader also on Saturday accepted the resignation of the head of the feared National Intelligence and Security Service, Salah Abdallah Mohammed Salih -- widely known as Salih Ghosh -- the military council announced. 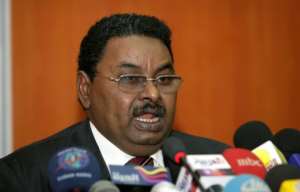 Salih Ghosh had overseen a sweeping crackdown led by NISS agents against protesters taking part in four months of mass demonstrations that led to the toppling of Bashir in a palace coup by the army on Thursday.

Dozens of protesters were killed and thousands of activists, opposition leaders and journalists arrested.

The police said Friday that 16 people had been killed in live fire in Khartoum alone over the previous two days as NISS agents led a desperate last stand for Bashir before the army intervened.

A photograph published by state news agency SUNA had shown Burhan talking with protesters outside army headquarters on Friday, before his elevation to the top job.

Khartoum erupted with joy when Ibn Ouf tendered his resignation on Friday night barely 24 hours after taking the oath of office.

Car horns sounded as jubilant crowds streamed out of their homes chanting: "It fell again, it fell again". 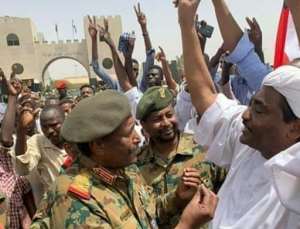 Sudan's second new military ruler in as many days, Lieutenant General Abdel Fattah al-Burhan, is seen talking with protesters before he assumed power outside army headquarters in a photograph released by state news agency SUNA. By - (SUDAN NEWS AGENCY/AFP)

But the organisers of the mass protests called on demonstrators to keep up their week-old vigil outside army headquarters.

Ibn Ouf had served as Bashir's defence minister right up to the president's downfall, after three decades of iron-fisted rule.

A former military intelligence chief, Ibn Ouf remains under US sanctions for his role in the regime's brutal response to an ethnic minority rebellion which erupted in the western region of Darfur in 2003.

Bashir himself came to power in a 1989 Islamist military coup, which toppled an elected government led by Sadiq al-Mahdi.

Burhan is a career soldier who comes with less baggage from Bashir's deeply unpopular rule than Ibn Ouf.

The Sudanese Professionals Association (SPA), whose grass-roots membership of doctors, teachers and engineers have spearheaded the nationwide protests, hailed Ibn Ouf's departure as "a victory of the people's will".

But it demanded that Burhan swiftly "transfer the powers of the military council to a transitional civilian government".

"If this does not happen we will continue with our sit-in in front of the army headquarters and other towns," the SPA said in a statement.

Bashir remained in custody and his National Congress Party on Saturday called on the military council to release arrested personnel. 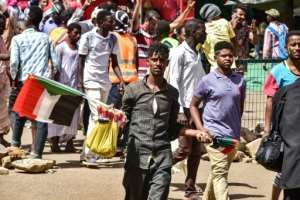 A Sudanese trader peddles national flags during the ongoing sit-in at the army headquarters on Saturday. By AHMED MUSTAFA (AFP)

"We consider (the) taking of power by the military council as violating the constitution's legitimacy," the NCP said in a statement.

"The NCP rejects the detention of its leaders, among them its acting president" Ahmed Harun, it added, calling for their immediate release.

Outside the Middle East, the formation of a military government to replace Bashir has met with widespread criticism.

The African Union said Bashir's overthrow by the military was "not the appropriate response to the challenges facing Sudan and the aspirations of its people".

The European Union urged the army to carry out a "swift" handover to civilian rule.

Former colonial ruler Britain said that the two-year transition announced by the military "is not the answer."

Members of the military council have sought to reassure foreign diplomats about its intentions. 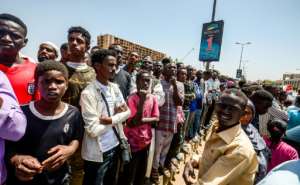 Sudanese protesters keep up their sit-in outside army headquarters in Khartoum demanding an immediate handover to civilian rule. By MOHAMMED HEMMEAIDA (AFP)

"This is not a military coup, but taking the side of the people," the council's political chief Lieutenant General Omar Zain al-Abdin told Arab and African diplomats at a meeting broadcast on state television on Friday.

The International Criminal Court (ICC) has long standing arrest warrants against Bashir for suspected genocide and war crimes during the regime's brutal campaign of repression in Darfur.

But the military council has said it would never extradite him or any other Sudanese citizen.