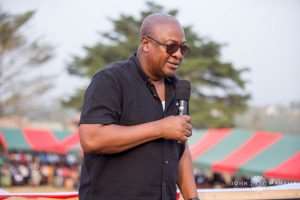 Former President John Mahama is asking NPP government not to sell off the Komenda Sugar factory.

“It is unacceptable to sell the factory. We can get the expertise and the technology to make this factory work,” he said to the media during his thank you tour of the Central Region.

Trade and Industry Minister, Alan Kyerematen told Parliament a new strategic investor will be announced by the end of April to acquire the assets of the Komenda Sugar factory .

The Minority in Parliament subsequently accused government of deliberately causing the factory to be undervalued so it can be sold off cheaply.

It said the government has side-stepped recommendations of a technical audit of the project only to pursue a motive of selling off the company.

Mr. Mahama urged the government to pursue the $23 million loan from the Indian Exim Bank for phase two of the project, which he said is still available.

“The loan from the Indian Exim bank is still available and so all the government needed to do was to take the money and implement the second phase of the project and once they had done that, this factory would be running,” he added.

He recalled that his administration had only looked for a private-public arrangement to provide the needed technical expertise but its intention was not to sell the factory.

Ghana has seen a significant rise in sugar importation since 2001.

In 2013, sugar import was the eighth most valuable product and the fourth largest food import after rice, fish, and poultry, as noted by Ghana’s Sugar Policy.

There are however projections that the consumption of sugar in Ghana could rise to 872,000 MT by 2030.

With this in mind, Mr. Mahama said the factory is needed to position Ghana on the right end of the import-export chain.

“If we produced of that sugar here, then it will reduce the foreign exchange we have to take outside to go and import sugar and so I will urge the government to follow the path that we took,” Mr. Mahama said.

The $35 million factory has been dormant due to a lack of funds. It was also noted that the sugar cane variety meant to feed the factory was not up to the required specifications.

It was closed down in June 2016, barely a month after then-President John Mahama commissioned it.

It was expected to be producing about 1,250 tonnes of sugar each day.