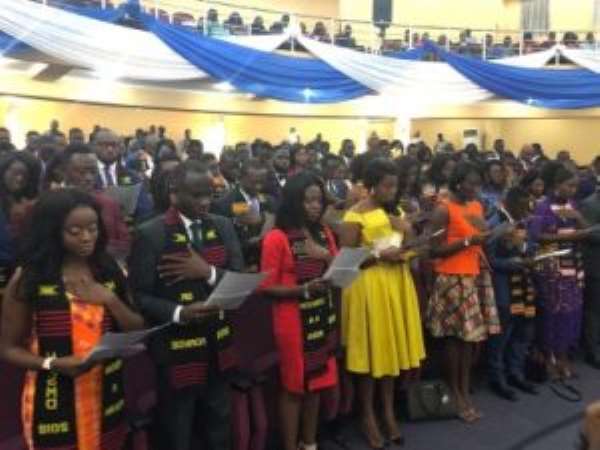 The Medical and Dental Council (MDC) of Ghana has inducted 106 newly qualified doctors, who were trained both locally and abroad.

They included professionals trained by the University of Ghana, and the Kwame Nkrumah University of Science and Technology Schools of Medicine and Dentistry, as well as those who had received their training from countries such as Ukraine, Russia, Cuba, China, the United States of America, Morocco, Belarus and the Czech Republic.

Dr Eli Kwasi Atikpui, the Registrar of Medical and Dental Council, conducted a roll call of the inductees and officially presented them to the Chairman of the Board, confirming that they had sat and passed the Council's registration examination and satisfied all other requirements to enable them to practice in Ghana.

Professor Paul Kwame Nyame, the Chairman of the Ninth Board of the Medical and Dental Council, administered the Hippocratic Oath (Physician's Oath), while a representative of the Minister of Health, led them to recite the National Pledge to reaffirm their commitment to duty and service to humanity.

They pledged not to allow religion, nationality, race, party politics or social standing to interfere in their duty in providing care for their patients, but would uphold their profession with conscience and dignity, and also respect the secrets of their patients even after they had died.

Prof. Nyame congratulated the inductees and admonished them to forsake greed, be humble, maintain high competences, learn to take advice from their seniors, and to seek continuous professional education.

He said the MDC was unhappy with the current low standards of foreign-trained doctors and the falling performances of students at the various health training institutions due to the rising number of admissions, which did not correspond with available facilities and tutors.

He said the Council was collaborating with the authorities to revise and harmonise the curriculum, and address other challenges contributing to the poor outcomes in order to assure quality.

Again, preparations are being made for a common Pre-Registration Examination in line with international practice of dissociating the qualifying examinations of the universities, from the licensure examinations of professional regulatory bodies, he said.

“There have been rumours and allegations about fairness of examinations, with allegations that certain candidates are deliberately failed as a form of discrimination or as a means of increasing the revenue of the Council,” he said, adding that these allegations were mischievous and ridiculous.

Again, the scope of practice of each professional group under the aegis of the MDC was being developed and that a Specialist Register would soon be opened for those who have had the appropriate training in their fields of specialisation as recognised by the council to streamline medical practice in Ghana, he said.

Mr Kwaku Agyeman Manu, the Minister of Health, in a speech read on his behalf, spoke about the negative attitudes and conduct of some health care practitioners, and the recent media reportage of claims of professional negligence, and health insurance fraud.

He advised them against the desire to get rich quickly through these negative practices, saying the MDC Board was working on developing a Scope of Practice and Ethics to streamline the conduct of medical practitioners in Ghana.

He admitted that although the country must strive to attain a good doctor-patient ratio to attain Universal Health Coverage, it ought to be done in a manner that would not compromise the quality and credibility of the profession.

Dr Anthony Nsiah-Asare, the Director-General of the Ghana Health Service (GHS), spoke against the refusal of doctors to be posted to underserved areas, saying while the capitals were chocked, other Ghanaians still suffered from lack of quality medical care.

He said this was unacceptable and that the GHS was no longer giving financial clearance or doing postings of medical practitioners, but advised that they go on its Portal, fill the required application forms and submit themselves for job interviews and postings to the areas of need across the country.

Dr Samuel Gepi-Attee, a Medical Urologist and Surgeon at the University of Ghana, advised the inductees to maintain a students' mentality by always seeking knowledge and being analytical, and to leave a legacy for which they would be remembered in future by keeping good documentation of events.