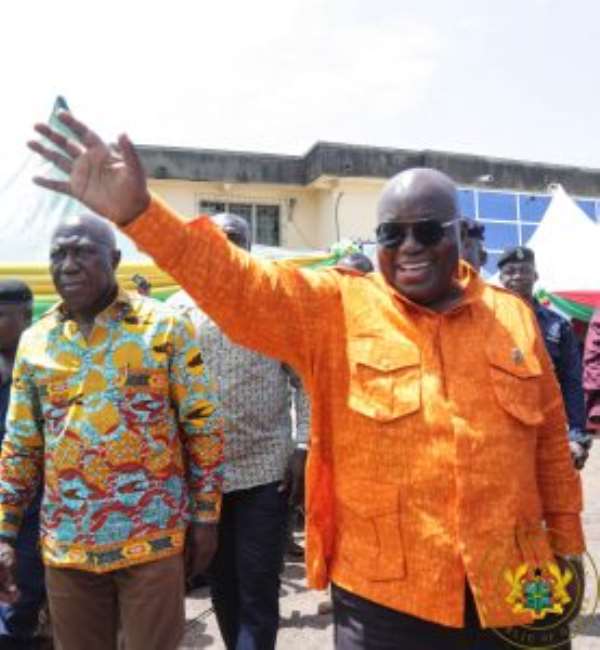 The President Nana Akufo-Addo is talking tough and has further threatened to crack the whip on any influential political figure who supports or condones activities of political vigilantes.

This comes on the back of a pending law meant to be passed to crack down on the activities of political vigilante groups.

President Nana Akufo-Addo has vowed that the anti-vigilantism law will severely deal with anybody irrespective of their social or political status.

Whilst mounting a spirited defence for the vigilantism bill, Nana Akufo-Addo was optimistic that the law will eradicate the activities of political militia groups once and for all.

Speaking at Sankore in the Asunafo North District of the Ahafo Region as part of his 4-day tour of two new regions in that part of the country, Akufo-Addo expressed confidence that vigilantism will not be experienced in the 2020 elections.

“The Bill, when passed, will ensure that not only the people who are inciting the violence will be punished, but also the powerful people behind them will face the full extent of the law. Once Parliament passes this bill, everyone involved in vigilantism will face the law – whether you are a Minister, Regional Minister, MP or not, once you are implicated, you will be prosecuted,” he added.

The President said the cycle of politically related acts of violence and vigilantism that occurs in Sankore, in the Asunafo South Constituency of the Ahafo Region, is soon coming to an end.

According to President, the Vigilantism and Related Offences Bill, which is currently before Parliament, when passed, should deal effectively with the worrying phenomenon of vigilantism not only in Sankore, but in all parts of the country.

Expressing his disgust at the spate of politically motivated violence in Sankore, he indicated that “this cycle of violence taking place in Sankore ends today.”

He assured residents that, as opposed to what happened in the run-up to the 2016 elections, where Sankore became a hotbed for clashes and attacks on residents, “in the 2020 elections, I give you my personal promise, it will not happen here in Sankore.”

President Akufo-Addo added that persons who resort to the use of violence to win an election are, automatically, not the people's choice.

“If you are, then there is no need to intimidate people into voting for you. The people themselves will rally together to vote for you. That is what we want to see here in Ghana – peaceful, free elections. If you are going to rely on violence and bloodshed, then it would appear that you are not the one the people want. I repeat, this will not happen again,” he said.

The President continued, “We are not going to allow Ghanaian politics, Ghanaian democracy, to be compromised by these acts of violence and thuggery. It will not happen again. Since October (2018), we have not heard any news of political violence in Sankore. We will continue to monitor the situation. I also call on you to be alert, and help me to ensure that peace continues to reign here in Ghana, especially here in Sankore.”