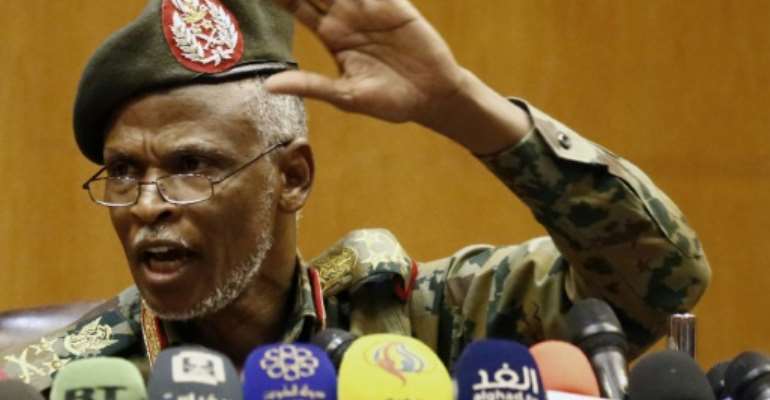 General Awad Ibn Ouf was sworn in as the head of the new Sudanese military council's political committee, only hours after the army's overthrow of Omar al-Bashir. By ASHRAF SHAZLY (AFP)

Sudanese General Awad Ibn Ouf, who led the overthrow of veteran leader Omar al-Bashir and has emerged as the country's new ruler, is already under US sanctions for his alleged role in the brutal Darfur conflict.

In a sombre televised statement on Thursday, Ibn Ouf announced the ouster of Bashir, who ruled the northeast African country with an iron-fist for 30 years before angry protesters brought him down.

"I announce as minister of defence the toppling of the regime and detaining its chief in a secure place," Ibn Ouf said.

"We have replaced him by a transitional military council for two years and have suspended Sudan's 2005 constitution."

Later on Thursday state television announced that Ibn Ouf had been sworn in as head of the military council triggering anger among the protesters.

"The regime has conducted a military coup by bringing back the same faces and the same institutions which our people rose up against," the Alliance for Freedom and Change, the group that is leading the protests said in a statement.

"We call on our people to continue their sit-in in front of army headquarters and across all regions and in the streets."

Protesters remained camped at the army headquarters in the capital for seventh straight day, vowing not to leave until the new military rulers quit.

Born in 1950, Ibn Ouf, a career soldier has been a regime insider and a close aide of Bashir since the former leader came to power in a coup in 1989. 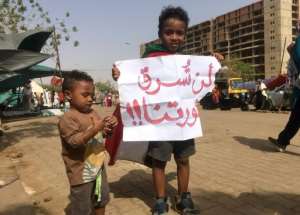 A Sudanese boy holds a sign reading in Arabic reading "Don't steal our revolution" as protestors vow to keep up their demos to ensure a civilian government is brought in. By - (AFP)

Ibn Ouf held several top ranking positions in the army as well as in the foreign ministry.

He rose through the ranks first to become a commander of the military's artillery division and then to head the army intelligence wing.

In 2010 he retired but was brought back five years later as the country's defence minister. In February Bashir made him his first vice president

"Awad Ibn Ouf is not only a high-ranking officer of Bashir's old guard, but one of the few in the army to be able to maintain the cohesion between the rival branches of the regime's security apparatus," said Paris-based Sudan analyst, Jerome Tubiana.

Between 2010 and 2015, Ibn Ouf served as a counsel in Khartoum's embassy in Cairo and later as ambassador to Muscat.

But it is his alleged role in the conflict in Darfur that analysts say might make Western powers wary of dealing with him directly.

Analysts say Ibn Ouf, a close aide of Bashir, played a key role in managing the Arab militias like the feared Janjaweed, who have been accused of committing genocide during the initial years of the conflict.

The United States put his name on its backlist of Sudanese officers sanctioned for their role in the conflict that has seen his assets blocked by the US treasury since 2007.

In May 2007, Washington said Ibn Ouf has been "linked to violence, atrocities and human rights abuses" in Darfur.

Bashir himself has been indicted for alleged war crimes and genocide in the Darfur conflict, in which according to the United Nations about 300,000 people have been killed and millions displaced.

Hundreds of thousands of people still live in sprawling camps across the region. 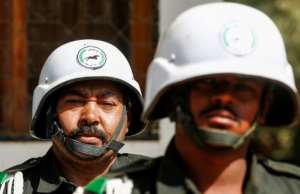 The Sudanese Popular Defence Force, a paramilitary group, has frequently fought on the side of Sudanese armed forces against ethnic minority rebels in Darfur. By ASHRAF SHAZLY (AFP)

The conflict erupted in 2003 when ethnic black rebels took up arms against Khartoum's Arab-dominated government, accusing it of economic and political marginalisation.

Ibn Ouf was as "deeply involved" in the conflict as Bashir himself, said Hollywood actor George Clooney on Thursday.

"Removing the leader of a violent, corrupt system without dismantling that system is inadequate," said Clooney, founder of The Sentry Project, which researches illicit money and war crimes in Africa.

But analyst Tubiana said the fact that Bashir agreed to go and Ibn Ouf had replaced him showed that it was "a palace revolution, aimed at protecting the regime and preventing the opposition, civilians and non-Islamists ... from taking power".

Some analysts say however that Ibn Ouf might not remain for long time as head of the military council.

"He's been taking decisions for a long time when it comes to the armed forces, but the task ahead is not going to be easy," said an analyst.

"The anger among protesters will be a continuous challenge. For all you know he might not be there for a long time."

Protesters vow to do exactly that.

"Ibn Ouf is weak, we will ensure he quits," said a protester without revealing his name for security reasons as he prepared for Friday prayers at the army complex.