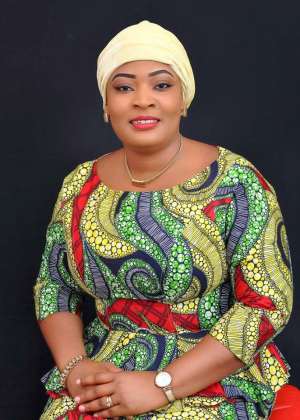 The Deputy Chief Executive Officer (DCEO) of Microfinance and Small Loans Centre (MASLOC), Hajia Abibata Shanni Mahama Zakariah has given President Akufo-Addo a higher percentage mark for recognizing and empowering more Ghanaian women than any other government in the history of this nation.

Hajia Abibata told the 3rd US-Africa International Women's Day Conference at Las Vegas in the United States of America (USA) in a PowerPoint presentation that apart from appointing more influential women into higher national positions, President Akufo-Addo had also prioritised the interest of women in the disbursement of MASLOC loans.

Hajia Abibata Zakariah received thunderous applause from the international participants when she disclosed that through the advice of the President, MASLOC led by her CEO, Mr Stephen Amoah had disbursed 87% of its total loans to women to start up and expand their small and medium scale enterprises.

From available records, Nana Akufo-Addo is indeed ahead of the late Prof John Evans Atta Mills and John Dramani Mahama when it comes to giving recognition to women to serve in government. The late Atta Mills promised to give 40% ministerial appointments to women but ended up with only 11%, which was far below the 25% women appointments by his predecessor, John Agyekum Kufuor.

Mr. John Dramani Mahama also appointed 24% females as ministers but Nana Addo who promised 30% women appointments has so far recorded 27% and still has two more years to achieve the 30% target.

Hajia Abibata Zakariah who is also an Aspiring Parliamentary Candidate for the Yendi Constituency said that the Nana Addo’s government and for that matter MASLOC had reposed much confidence in women due to their ability to pay back the loans.

She indicated that in lieu of the impact made on the productive poor, especially women, Two Hundred Million Ghana Cedis (GHC200,000,000.00) had been captured in the 2019 budget for MASLOC by the ruling government for disbursement to Ghanaian citizens, irrespective of their political, tribal or religious affiliations.

To say the least, Ghana was featured prominently at the 3rd US-Africa International Women's Day Conference, as the Deputy CEO of MASLOC dominated most of the major discussions at the Conference.

Preceding the main Conference, Hajia Abibata who had earlier on receivedthe Global Female Leadership Impact Award, inducted into the Global Women Leaders Hall of Fame (GWLHOF) and named among the Top 100 Most Influential Women Leaders in Emerging Economies at the 5th edition of the South America-Africa-Middle East-Asia Women Summit (SAMEAWS) 2017, organised by the Centre for Economic and Leadership Development (CELD) at the Shangri-La Hotel in Dubai, met with the United States' Congresswoman, Dina Titus.

The Deputy MASLOC CEO explained the enormous contributions of her outfit in the development and empowerment of Ghanaian citizens especially women and the youth.

The Congresswoman highly praised MASLOC, as well as the Government of Nana Addo Dankwa Akufo-Addo for placing women on top of MASLOC's agenda.

Impressed with her excellent delivery, the US Congresswoman, Dina Titus who is a strong advocate of women empowerment, gave a solemn pledge to Hajia Abibata Zakariah to support any initiative in Ghana and Africa that supports women development.

Dina Titus encouraged Hajia Abibata to aspire for higher positions in Ghana and beyond in order to impact the lives of many women across the globe.

The Congresswoman was particularly elated to hear the aspiration of the young astute Development Practitioner and politician, Hajia Abibata to contest for the Yendi parliamentary seat in 2020 and urged her to pursue her dream to serve as motivation for other young women.

The Deputy MASLOC CEO was also featured prominently on one of the leading radio stations in Las Vegas KCEP Power 88.1MHZ where she once again sold Ghana and MASLOC to the international world.

The Radio Host, Franklyn Gee who saw much potentials in Hajia Abibata Zakariah and her genuine commitment to the service of Ghana, openly professed her as a woman with unlimited political and social leadership capabilities.

Franklyn Gee thus demanded to have a historic photograph with Hajia Abibata Zakariah to remind the world about what he had predicted about Abibata Zakariah's political future.

The radio host was highly impressed to see a young vibrant, confident and self-motivated African woman who is so passionate about women and youth empowerment and development of her nation.

The Deputy MASLOC CEO who was being listened to by the international participants of the US-Africa International Women's Day Conference from across the World, said she draws much inspiration to do the things she does from the President of Ghana, Nana Akufo-Addo who is the Co-Chair of the UN’s Sustainable Development Goals (SDGs) and AU Gender and Development Champion for Africa.

"I am here today because our President Nana Akufo-Addo who has so much respect and confidence in women, saw the need to make me part of his government just as he has done for many other women of our country who are serving in various capacities".

Hajia Abibata Shanni Mahama Zakariah was also awarded a “Certificate of Special Congressional Commendation” at the 3rd US-Africa International Women's Day Conference, which she dedicated to her CEO, Management and staff of MASLOC and the people of Ghana.